What does Madalyn mean?

[ 3 syll. ma-da-lyn, mad-al-yn ] The baby girl name Madalyn is pronounced as MAED-aa-LihN †. Madalyn is primarily used in the English language and it is of Hebrew origin.

In addition, Madalyn is a variant spelling of the English name Madeline as well as an English form of Magdalena.

Variant forms inherit the origin and meaning of the name Madalyn.

Madalyn is a somewhat popular baby name for girls. The name rose in popularity from the 1990s up to the 2000s. Its usage peaked modestly in 2008 with 0.055% of baby girls being given the name Madalyn. It ranked at #292 then. The baby name has since experienced a decline in frequency. In 2018, its usage was 0.021% and its ranking #731, but it was nonetheless the 2nd most popular after Madeline, among all girl names in its group. In 2018, it was used 8 times more than Madalyn. 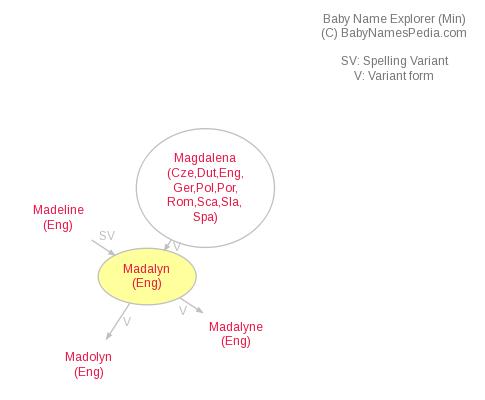