What does Maddox mean?

[ 2 syll. mad-dox, ma-dd-ox ] The baby girl name Maddox is also used as a boy name, with the latter form being far more popular. It is pronounced MAA-DaaS †. Maddox's origin is Welsh. The first name is derived from the Welsh surname, which is also found in forms such as Maddock and Mattock. The surname means 'son of Madoc' in reference to the personal name 'Madoc'. The name was made known when the actress Angelina Jolie gave it to her adopted Cambodian son in 2002. See Maddox for more information.

Forms of Maddox include the names Maddoxx, Madox, and Madoxx.

Maddox is not popular as a baby girl name. It is not in the top 1000 names. Maddox has in the last century been mainly given to boys. 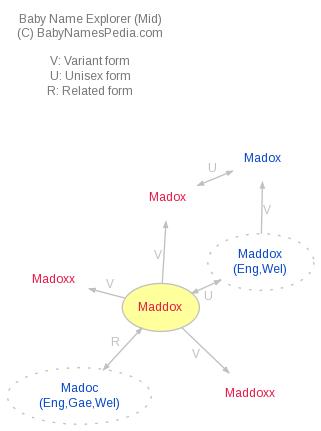