What does Madison mean?

[ 3 syll. ma-di-son, mad-is-on ] The baby girl name Madison is also used as a boy name, though it is far more popular for girls. It is pronounced as MAADih-SahN †. Madison is of English origin and it is also used mainly in English. Its meaning is from the word son. The first name is derived from a surname, which is either of the meaning 'son of Maud', or else a derivative of Magdalen. The popularity of the name was boosted in the USA by the 4th US President James Madison (1751-1836), who gave his name to Madison Square and Madison Avenue in New York. See Madison for more information.

Madison has 17 forms. Forms of the name include Maddi, Maddisan, Maddisen, Maddyson, Madisen, Madisson, Madisun, Madsen, Madysen, Madysin, Madyson, and Mattison. Other English forms include the diminutives Maddie, Maddy, and Mattie, and the spelling variants Maddison and Madisyn.

See also the related form, the English and French Madeleine.

Madison is very popular as a baby girl name. The name increased in popularity from the 1980s up to the 2000s; prior to that, it was of only infrequent use. Its usage peaked in 2001 with 1.121% of baby girls being named Madison. It had a ranking of #2 then. The baby name has experienced a drop in popularity since then. In 2018, it ranked at #22 with a usage of 0.381%, but it was nevertheless the most popular among all girl names in its family. Madison was 8 times more commonly used than the 2nd most popular name, Madeleine, in 2018. Although Madison is today more frequently used for baby girls, there was a period prior to 1952 when more boys were given the name. After 1985, increasingly the name became more popular with baby girls than with boys. There were 104 times more baby girls than boys who were named Madison in 2004. 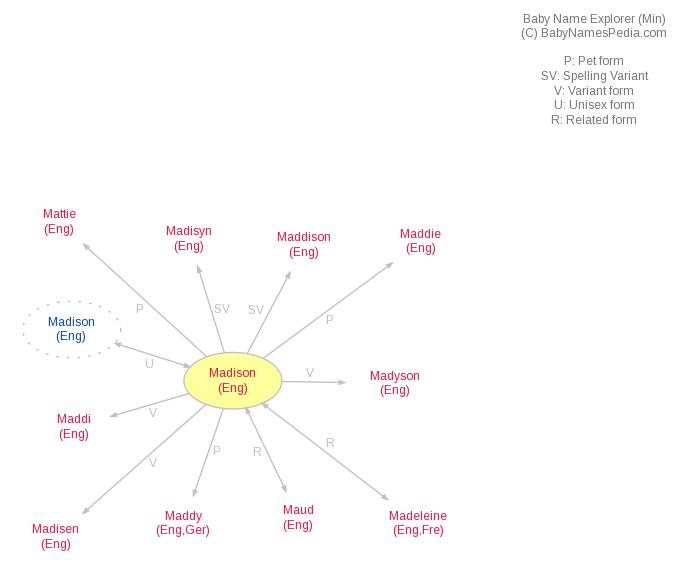