What does Maeve mean?

[ 1 syll. mae-ve, ma-eve ] The baby girl name Maeve is pronounced as MEYV †. Maeve has its origins in the Celtic language, and it is used largely in English and Irish. Maeve's meaning is 'intoxicating, she who intoxicates'. It is derived from the element meadhbh which is of the meaning 'Intoxicating'. The name is Anglicized from the Gaelic Meadhbh (Old Irish); it was borne in Irish mythology by a legendary warrior queen of Connacht. It also appeared in the Shakespeare play Romeo and Juliet (1595) as Queen Mab, the queen of the fairies, possibly named after the queen of Connacht herself. The name is used primarily in Ireland.

Maeve is fairly popular as a baby name for girls, and it is also regarded as trendy. The name has been growing in popularity since the 1990s; prior to that, it was of only very light use. Its usage peaked modestly in 2018 with 0.052% of baby girls being named Maeve. It ranked at #334 then. Among all girl names in its group, Maeve was the most popular in 2018. Maeve was thrice as popular as the next ranked name, Mavis, in that year. 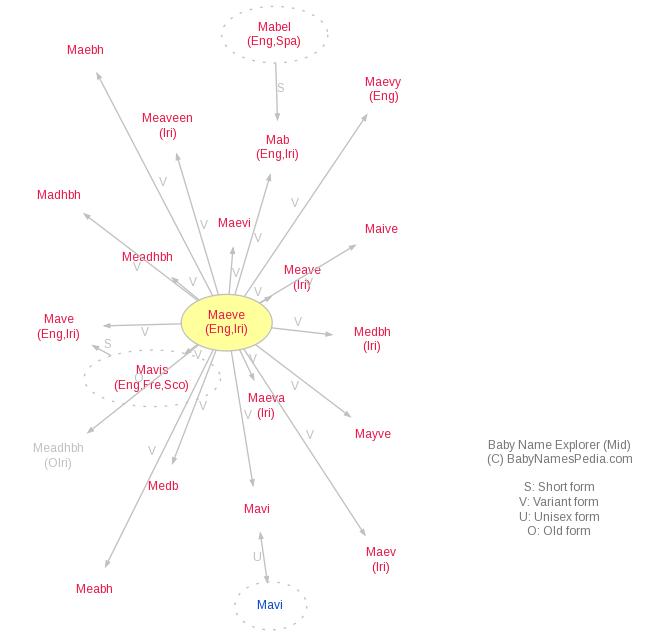