What does Magdalena mean?

[ 4 syll. mag-da-le-na, ma-gdal-ena ] The baby girl name Magdalena is pronounced in English as MaeG-Dae-LEY-Nae, in German as MaaK-Daa-LEH-Naa, or in Polish as MaaG-Daa-LEH-Naa †. Magdalena has its origins in the Hebrew language. It is used largely in Czech, Dutch, English, German, Polish, Portuguese, Romanian, Scandinavian, Slavic, and Spanish. The first name is derived from the name Mary Magdalene, borne in the Bible by the woman who was cured of evil spirits and infirmities. Her name Magdalene means 'of Magdala', referring to the village on the western shore of the Sea of Galilee, north of Tiberias; the place name is itself from the Hebrew word migdal. The biblical name 'Mary of Magdala' was used to differentiate her from other women with the common first name Mary. Mary Magdalene is also considered a saint by Roman Catholics; her relics were first venerated at an abbey in Burgundy in 771 and her body later venerated at Provence in 1279, leading to an increase in popularity of the name and its subsequent introduction from France into England in the 13th century.

What are the Variant Forms of Magdalena?

See also the related forms, the German Annalena and the German, Spanish, and Dutch Marielena.

Magdalena is unusual as a baby girl name. Its usage peaked in 2005 with 0.016% of baby girls being named Magdalena. It had a ranking of #813 then. The baby name has substantially dropped in popularity since then, and is used only on a very modest scale today. In 2018, among the family of girl names directly related to Magdalena, Madelyn was the most commonly used. 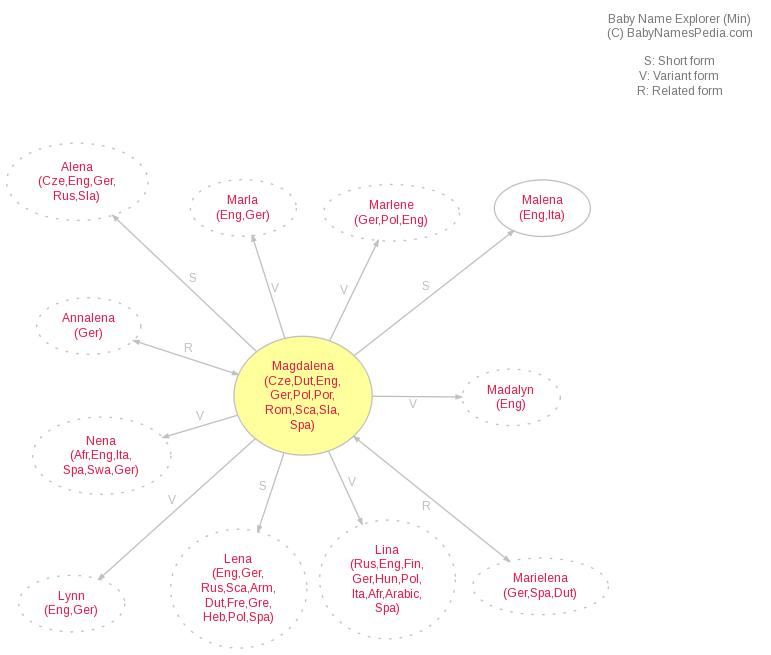