What does Maggie mean?

[ 2 syll. mag-gie, ma-gg-ie ] The baby girl name Maggie is pronounced as MAA-JHiy- †. Maggie is mainly used in the English language. Its language of origin is Hebrew and Old Greek.

Maggie is a familiar form of Magdalena in the English language.

Maggie is also a familiar form of the English and Scottish name Margaret in the English language.

Maggie is popular as a baby girl name. In 1900, 0.329% of baby girls were given the name Maggie. It was #75 in rank then. The baby name has suffered a marked decline in frequency since then, and is in recent years of modest use. In 2018, its usage was only 0.061% and its ranking #292. Out of the family of girl names directly linked to Maggie, Margaret was the most frequently used. In 2018, the name was twice as popular as Maggie. Maggie has primarily been a girl name, though in the last century it has also been used for boys. In 1906, 39 times more girls than boys were given the name Maggie. 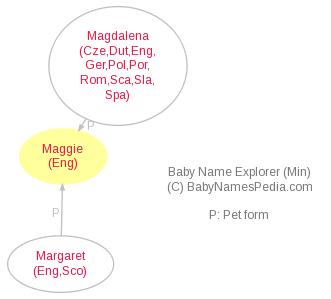