What does Magnus mean?

[ 2 syll. ma-gnus, mag-n-us ] The baby boy name Magnus is pronounced in English as MAEG-NahS †. Magnus is used chiefly in English, German, and Scandinavian, and its origin is Latin. It is literally from the word 'magnus' with the meaning great. Makkr (Old Norse) is an original form of the name. The first name is derived from the Latin byname, first known from the Holy Roman Emperor Charlemagne (747-814), whose name was recorded in Latin as Carolus Magnus, or 'Charles the Great'. The name was later taken up by medieval Scandinavians in tribute to the emperor. Saint Olaf, the early 11th-century king of Norway and a convert from paganism, gave the name Magnus to his son. Magnus soon became a traditional royal name, borne by seven kings of Norway, including Magnus I (Magnus the Noble, 1035-1047) and Magnus VI (Magnus the Law-Mender, 1238-1280). Three kings of Sweden and several saints also bore the name. The name was introduced into Ireland and Scotland through the Shetlands during the Middle Ages.

Magnus is somewhat popular as a baby name for boys. The name's popularity has been growing since the 2010s; before that, it was of infrequent use only. Its usage peaked modestly in 2017 with 0.017% of baby boys being named Magnus. It ranked at #721 then. In 2018, its usage was 0.015% and its ranking #782. Among the group of boy names directly related to Magnus, Mack was the most regularly used. In 2018, it was used 43% more than Magnus. 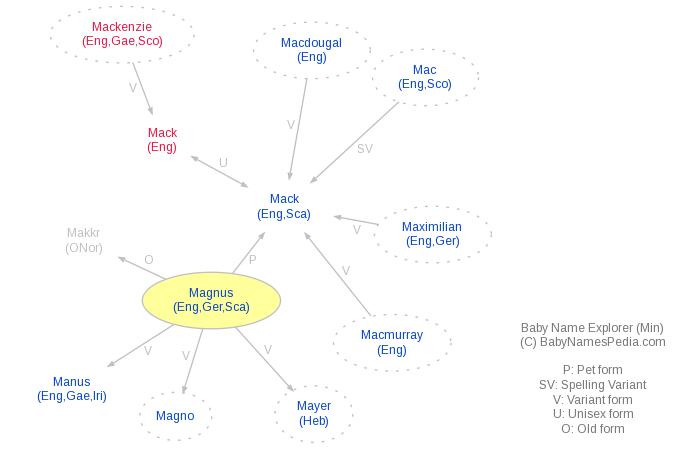