What does Maisie mean?

[ 2 syll. mai-sie, ma-is-ie ] The baby girl name Maisie is pronounced as MEY-Siy- †. Maisie is used chiefly in English, Gaelic, and Scottish, and it is derived from Old Greek origins.

Maisie is a diminutive form of the name Mairead (English, Gaelic, and Scottish) in the English and Gaelic languages.

Maisie is also a diminutive form of the name Margaret (English and Scottish).

Maisie is a fairly popular baby name for girls, and it is also regarded as trendy. The name's popularity has been increasing since the 2010s; before that, it was of very light use only. At the modest height of its usage in 2018, 0.034% of baby girls were named Maisie. It ranked at #498 then. In 2018, within the group of girl names directly related to Maisie, Margaret was the most regularly used. It was used 4 times more than Maisie in that year. 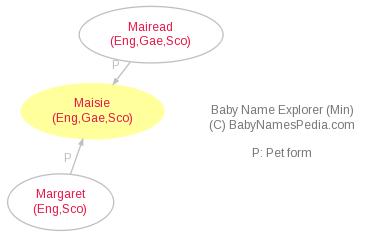