What does Malachi mean?

[ 3 syll. ma-lac-hi, mal-a-chi ] The baby boy name Malachi is sometimes used as a girl name. Its pronunciation is MAEL-ah-Kay (English) †. Malachi is used chiefly in the English, Gaelic, and Hebrew languages, and it is derived from Hebrew origins. The name's meaning is my messenger. A biblical name, it is derived from the element 'malak' which means messenger, angel. The name was borne in the Bible by the last of the twelve minor prophets, who wrote the Book of Malachi in the Old Testament. The name was also borne by Máel Sechnaill mac Máele Ruanaid (-862), the High King of Ireland known as Malachy I. The name was also known from 'Malachi Malagrowther', a pseudonym used by Sir Walter Scott (1771-1832). The name was first adopted in the 17th century by English Puritans.

Malachi has 21 variants that are used in English and other languages. Variants used in English include Maeleachlainn, Malachia, Malachie, Malachy (used in Irish as well), Malak, Malakai, Malaki, Malakia, Malakie, Malaquias, Malechy, Maleki, Malequi, and Malochai. The variant spellings Malachai and Malakhi are other English forms.

Malachi is popular as a baby name for boys. The name's popularity has been rising since the 1980s. At the modest peak of its usage in 2016, 0.129% of baby boys were given the name Malachi. It ranked at #156 then. In 2018, its usage was 0.128% and its ranking #155, and it was the most popular out of all boy names in its group. In 2018, Malachi was thrice as popular as the next most popular name, Malik. Malachi has mostly been a baby boy name in the past century. 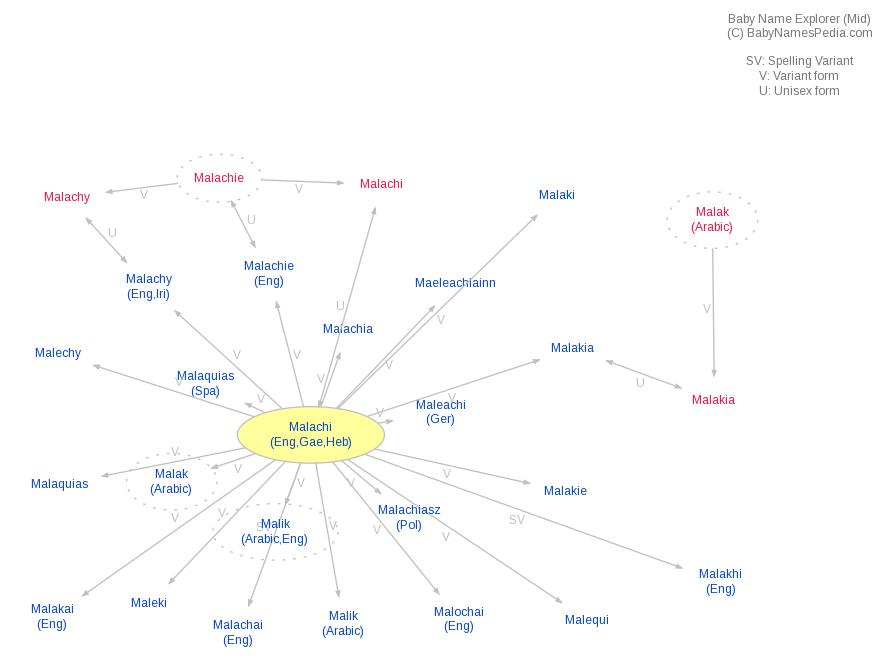