What does Manu mean?

Manu is largely used in the African, Basque, French, and Indian languages, and it is derived from Sanskrit origins. The name's meaning is original man. It is derived literally from the word 'manu' which means man. The name was borne in Hindu mythology by the father of mankind and the first king to rule the earth, also known as Satyavrata.

Manoo, Manou, Manue, and Manú (German) are variants of Manu.

Manu is used chiefly in the Tahitian language and its origin is Polynesian-Tahitian. Here, it means bird.

In addition, Manu is a German contraction of the name Manuel (English, German, Portuguese, and Spanish).

Manu is infrequently used as a baby name for boys. It is listed outside of the top 1000 names. Out of the group of boy names directly linked to Manu, Manuel was the most regularly used in 2018. 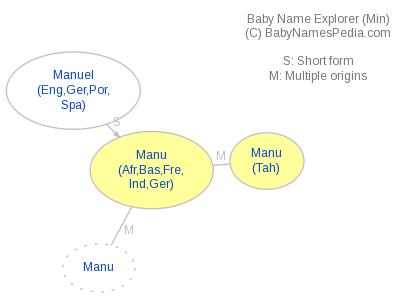