What does Marcia mean?

[ 3 syll. mar-cia, ma-rc-ia ] The baby girl name Marcia is pronounced MAAR-Siy-ah or MAAR-SHah in English, MAAR-THYaa in Spanish, or MAAR-SYaa in Spanish-Latin American †. Marcia's origin is Latin and Aramaic, and its use, English, Italian, Portuguese, Spanish, and Polish. From Latin roots, its meaning is 'war-like, dedicated to Mars; gleaming' - in this context, Marcia can be used in the English, Italian, Portuguese, and Spanish languages. The name developed as the feminine form of Marcius, a Latin derivative of Marcus and thus the elements marcus, mars or mar. It has however, often been taken as a feminine form of Mark. The name was borne by three early and minor Christian saints. It was first adopted by English speakers in the late 18th century. In literature, it was made known by the heroine of the Thomas Hardy novel The Well-Beloved (1897).

In addition, Marcia is a form (Polish) of the English, German, Greek, and Scandinavian Martha.

Marcia is the feminine version of the Italian, Portuguese, Spanish, and English Marcio.

Marcia is uncommon as a baby girl name. At the height of its usage in 1951, 0.287% of baby girls were named Marcia. It was #74 in rank then. The baby name has substantially slipped in popularity since then, and is currently used only on a very modest scale. In 2018, within the family of girl names directly related to Marcia, Martha was the most widely used. 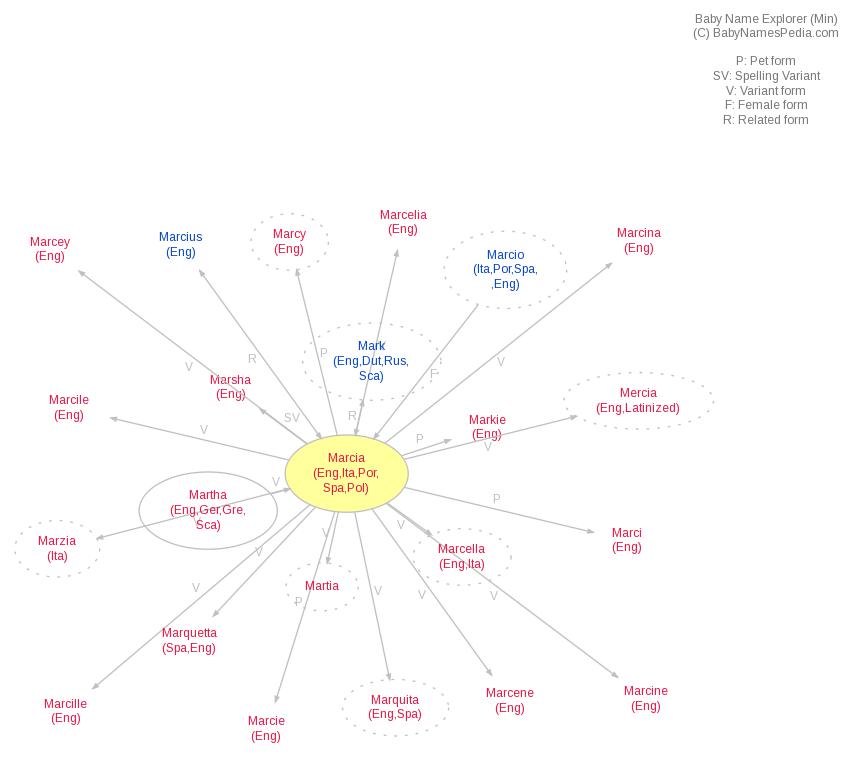