What does Marcio mean?

[ 2 syll. mar-cio, ma-rc-io ] The baby boy name Marcio is pronounced in Spanish as MAAR-THYow or in Spanish-Latin American as MAAR-SYow †. Marcio is an Italian, Portuguese, Spanish, and English name of Latin origin. It is from the element 'marcus' meaning dedicated to Mars. The name is derived from Marcius (Latin), which is itself from Marcus.

Marcio is a variant of the name Marcus (English, Scandinavian, French, and German).

Marcio is also a variant of the name Mark (English, Dutch, Russian, and Scandinavian) in the English language.

The name Marcia (English, Italian, Portuguese, Spanish, and Polish) is the female form of Marcio.

Marcio is infrequently used as a baby name for boys. It is not listed in the top 1000 names. Among the group of boy names directly linked to Marcio, Marcus was the most widely used in 2018. 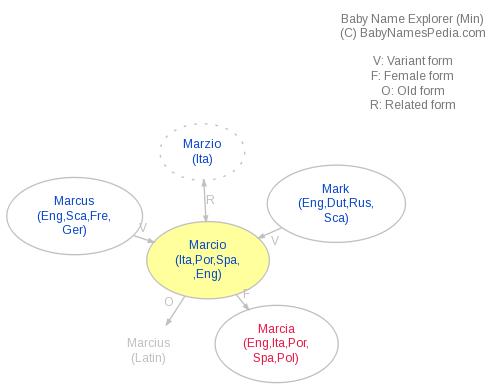