What does Maren mean?

[ 2 syll. ma-ren, mar-en ] The baby girl name Maren is also used as a boy name, though it is far more popular for girls. It is pronounced MAA-RehN or MEHR-RehN †. Maren has its origins in the Latin and Hebrew languages. It is used largely in English, Frisian, German, Scandinavian, and Aramaic.

Maren is a form of the English, French, and Polish Marin.

Maren is also a form (English, Frisian, German, and Scandinavian) of Marina.

Maren is also a form (Aramaic and English) of the English Mary.

Maren is rather popular as a baby girl name, and it is also regarded as trendy. The name has been rising in popularity since the 2010s. At the modest peak of its usage in 2018, 0.027% of baby girls were named Maren. It was #607 in rank then. Out of all girl names in its family, Maren was the 2nd most popular after Mary in 2018. It was 5 times more popular than Maren in that year. Maren has primarily been a baby girl name in the last century. 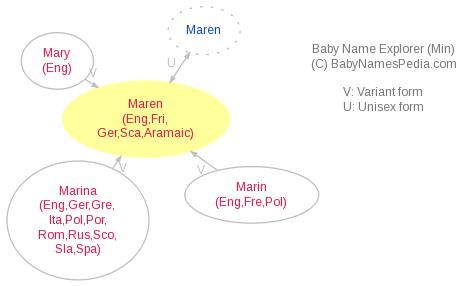