What does Margaux mean?

[ 2 syll. mar-gau(x), ma-rga-ux ] The baby girl name Margaux is pronounced MaaRGOW †. Margaux has its origins in the Old Greek language, and it is used largely in French and English. The name is a fanciful re-spelling of Margot influenced by the name of the wine-producing French town near Bordeaux. It was borne by Margaux Hemingway (Margot Louise Hemingway, 1954-1996), who changed her name in tribute to the Margaux red wine that her father, the writer Ernest Hemingway, and her mother drank on the evening that she was conceived.

In addition, Margaux is a variant form of the English and Scottish Margaret in the French language.

Margaux is also a variant form of the Eastern European, English, French, and German Margot in the English and French languages.

A variant form of Margaux is the name Margeaux.

Variant forms share both the origin and meaning of the name Margaux.

Margaux is uncommon as a baby name for girls. It is not in the top 1000 names. In 2018, within the group of girl names directly related to Margaux, Margaret was the most widely used. 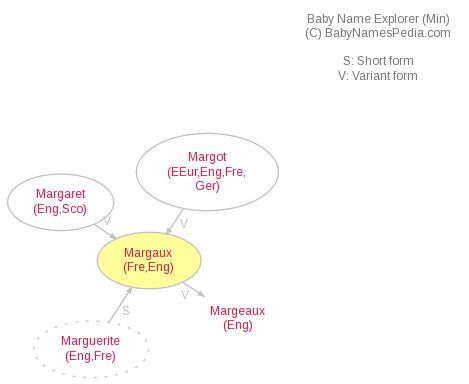