What does Maria mean?

[ 3 syll. ma-ria, mar-ia ] The baby boy name Maria is also used as a girl name, with the latter form being much more common. Its pronunciation is Mah-RIY-ah in English, Maa-RIY-aa in Dutch, German and Italian, or MAAR-Yaa in Polish †. Maria is used chiefly in the German, Italian, and Polish languages, and its origin is Hebrew. This is sometimes used as a middle name for baby boys in Germany, Italy, and Poland. See Maria for more information.

Maria is uncommon as a baby name for boys. At the modest height of its usage in 1982, 0.006% of baby boys were given the name Maria. Its ranking then was #825. The baby name has since experienced a fall in popularity, and is today of infrequent use. Within all boy names in its group, Maria was nonetheless the most widely used in 2018. Maria has predominantly been a girl name in the past century. In 1989, girls named Maria outnumbered boys by 60 times. 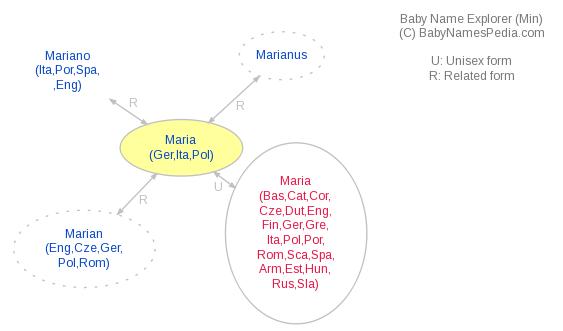