What does Mariam mean?

[ 2 syll. ma-riam, mar-i-am ] The baby girl name Mariam is pronounced Maa-RYAA-M or MEHR-iy-ahM †. Mariam's language of origin is Hebrew, and it is predominantly used in Arabic and English.

Mariam is a derivative (Arabic and English) of the English Mary.

Mariam is also a derivative (English) of the English, French, German, Yiddish, and Hebrew Miriam.

Mariam is a fairly popular baby name for girls. The name has been rising in popularity since the 1990s. At the modest peak of its usage in 2018, 0.030% of baby girls were named Mariam. Its ranking then was #548. In 2018, out of the group of girl names directly related to Mariam, Mary was the most commonly used. Its use outnumbered Mariam's by 4 times in that year. 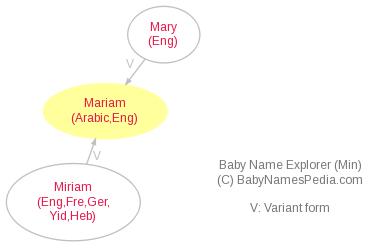