What does Marian mean?

[ 2 syll. ma-rian, mar-i-an ] The baby girl name Marian is also used as a boy name, though it is far more popular for girls. It is pronounced MAAR-YaaN in Polish †. Marian is of Hebrew origin and it is used mainly in English. The name originally developed as a medieval English form of the French name Marion, but since the 18th century, which saw a rise in popularity of combination names, it has also been taken as a combination of Mary and Ann. The name has been made known by Maid Marian, the love interest of Robin Hood in English folklore. See Marian for more information.

Marian is a form of the English, French, and German Marion in the English language.

Marian is also a form of the English Mary.

Marian is also a form of the English Maryann.

Marian has 18 forms that are used in English and foreign languages. English forms of the name include Mariane, Marianne, Marien, Mariene, Marienne, Marion, Marionne, Marrian, Marriane, Marriann, Marrianne, Maryanne, and Maryon. Another English form is the shortening Mar.

Forms used in foreign languages include the Polish Maniek, the Spanish Mariana, the Dutch Marjan, and the Polish Marus.

Marian is uncommon as a baby girl name. At the modest height of its usage in 1928, 0.325% of baby girls were named Marian. It had a ranking of #71 then. The baby name has markedly dropped in popularity since then, and is used only on an infrequent scale today. Within the family of girl names directly related to Marian, Mary was the most popular in 2018. Marian has in the last century been mainly given to baby girls. There were 47 times more baby girls than boys who were named Marian in 1914. 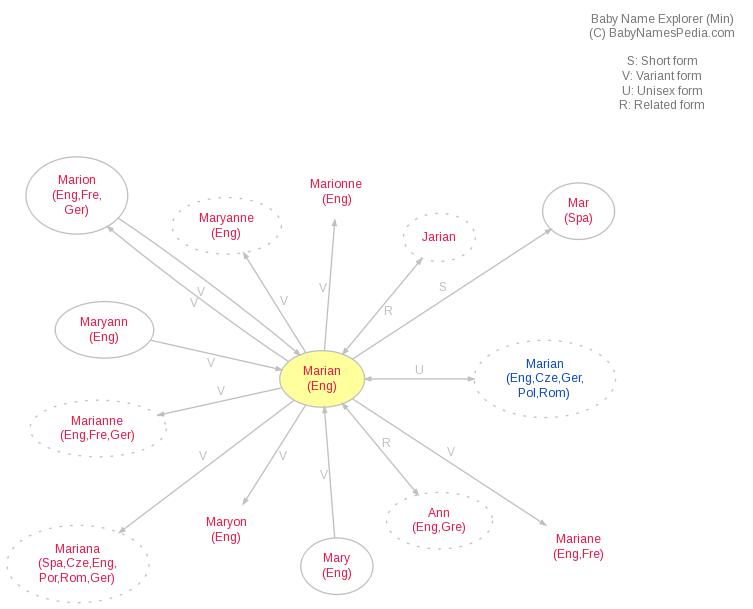