What does Mariana mean?

Mariana is of Hebrew origin, and it is used mainly in the Czech, English, Portuguese, Romanian, and Spanish languages. The name has been used by Shakespeare in his play Measure for Measure (1603).

Variant forms inherit both the origin and meaning of the name Mariana.

Mariana is a Spanish form of the English Marian.

Mariana is also a Czech, English, Portuguese, Romanian, and Spanish form of Marianna.

Mariana is also an English form of the English, French, and German Marianne.

Mariana is also an English and German form of the English Mary.

Mariana is popular as a baby girl name. The name increased in popularity from the 1970s up to the 2000s; prior to that, it was of only infrequent use. At the modest height of its usage in 2005, 0.102% of baby girls were named Mariana. It was #166 in rank then. The baby name has seen a drop in popularity since then. In 2018, it ranked at #286 with a usage of 0.062%, but it was nevertheless the 2nd most popular after Mary, within all girl names in its family. The name was twice as popular as Mariana in 2018. 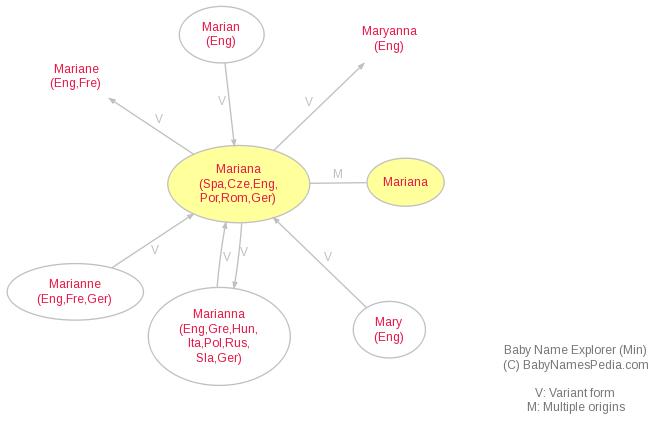