What does Marianne mean?

[ 3 syll. ma-rian-ne, mar-ia-nne ] The baby girl name Marianne is pronounced as MAA-Riy-aeN †. Marianne is used mostly in English, French, and German, and its language of origin is Hebrew. The name is a combination of Maria and Anne. It has been adopted by English speakers since the 18th century. In France, the name originated as an assimiliated form of Mariamne or a diminutive of Marie. Marianne became the national emblem of the French Republic and the personification of Liberty and Reason after the French Revolution (1789). The name has also been used in literature; notable works include Shakespeare's All's Well That Ends Well (1603-1604) and Measure for Measure (1604). The latter was the basis for Tennyson's character in his poems Mariana (1830) and Mariana in the South (1832). The name was also used by Jane Austen for a heroine in her novel Sense and Sensibility (1811).

Marianne is a derivative of the English name Marian.

Marianne is also a derivative (French) of Marianna.

Marianne is also a diminutive form (English and French) of the Czech, English, French, and German name Marie.

The origin and meaning of the name Marianne is inherited by all variant forms.

Another variant of Marianne is the Polish diminutive form Marianka.

Marianne is unusual as a baby name for girls. Its usage peaked modestly in 1957 with 0.144% of baby girls being named Marianne. It ranked at #139 then. The baby name has since substantially slipped in popularity, and is currently used on a very light scale. In 2018, among the group of girl names directly related to Marianne, Anna was the most widely used. 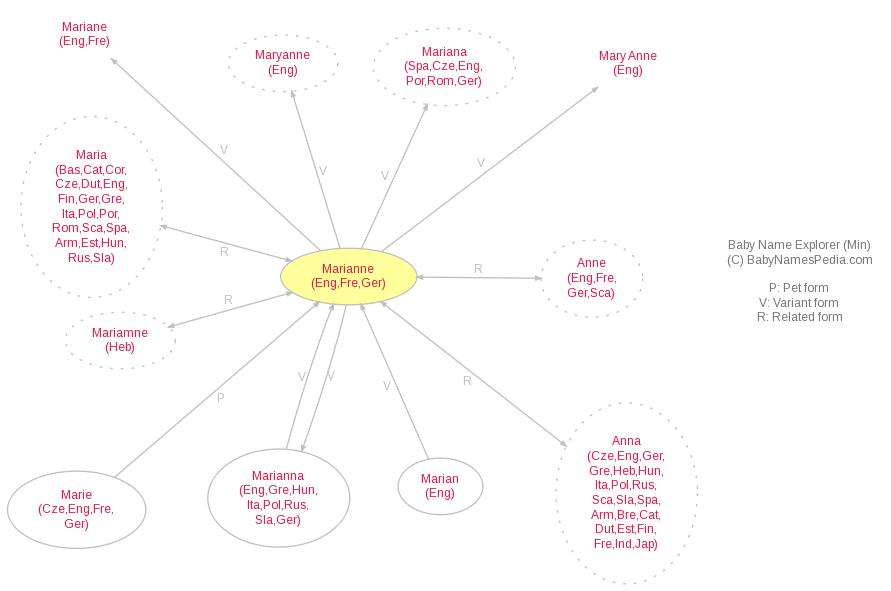