What does Marion mean?

[ 3 syll. ma-rion, mar-i-on ] The baby girl name Marion is also used as a boy name, with the latter form being slightly more popular. It is pronounced MAER-iy-ahN or MEHR-iy-ahN in English †. Marion's origin is Hebrew, and its use, English, French, and German. The name was first derived as a French diminutive of Marie introduced to medieval Britain. It was borne in legend by Maid Marian, also known as Marion, the love interest of Robin Hood. See Marion for more information.

Marion is a form of the English Marian.

Marion is also a form of the English Mary in the English, French, and German languages.

Marion is uncommon as a baby girl name. At the modest height of its usage in 1917, 0.478% of baby girls were named Marion. It had a ranking of #45 then. The baby name has dropped out of favor since then, and is of only irregular use today. In 2018, within the family of girl names directly related to Marion, Mary was the most popular. Though there were times prior to 1988 when more girls than boys were given the name Marion, the name is today somewhat more frequently used for boys. 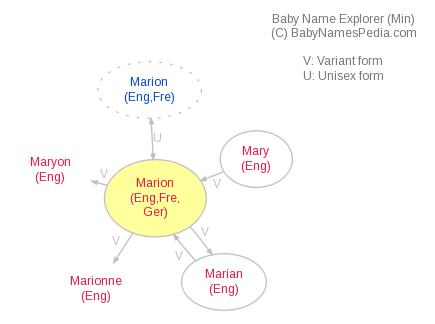