What does Maris mean?

[ 2 syll. ma-ris, mar-is ] The baby girl name Maris is pronounced as MAA-RihS- †. Maris' language of origin is English, Old Greek, Latin, Italian, and Hebrew. It is predominantly used in Greek and English. From Latin roots, its meaning is 'of the sea' - in this context, Maris can be used in the English language. It is a biblical name derived from the word mare with the meaning 'sea'. The name is of obscure origin; it could be of the Latin title 'Stella maris', meaning 'star of the sea' in reference to Mary the mother of Jesus. The name was popularized in the late 20th century by a fictional character of the name in the hit US TV comedy series Frasier (1993-2004).

In addition, Maris is a Greek shortening of the English and Hebrew Amaris.

Maris is also an English form of the English and German Damaris.

Maris is also an English shortening of the English, Italian, Portuguese, Spanish, and German Marisa.

Maris is also a form of the English Mary.

See also the related forms, the English Adamaris and the name Jumaris.

Maris is not often used as a baby girl name. It is not in the top 1000 names. In 2018, among the family of girl names directly related to Maris, Mary was the most widely used. 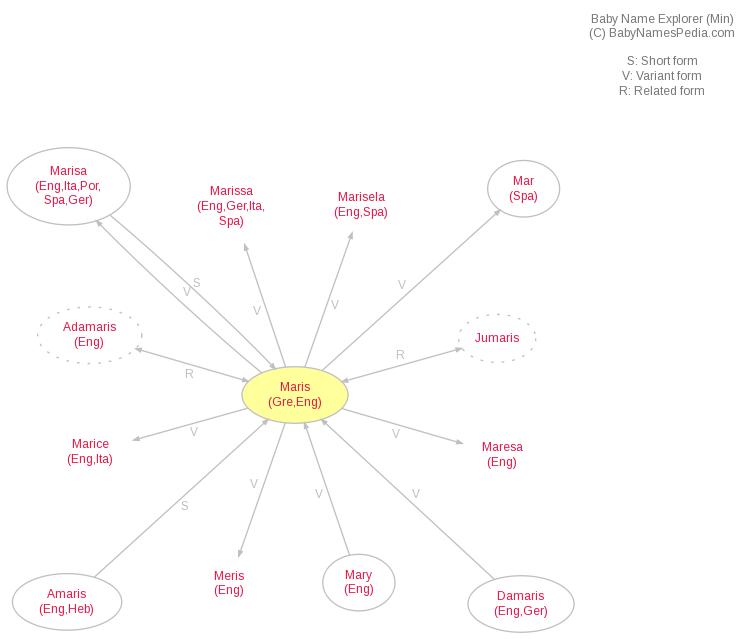