What does Marisa mean?

[ 3 syll. ma-ri-sa, mar-isa ] The baby girl name Marisa is pronounced as Mah-RIHS-ah in English or Maa-RIY-Saa in Italian and Spanish †. Marisa is primarily used in the English, Italian, Portuguese, Spanish, and German languages. Its language of origin is Latin, Italian, and Hebrew. The name is derived from the combination of Maria or Marina with Luisa or Lisa.

Marisa is an English form of the Greek and English name Maris.

Marisa is also an English, German, Italian, Portuguese, and Spanish form of the English name Mary.

The name Marisa is widely used; it has 30 forms that are used in English and other languages. Forms of Marisa used in English include Mareesa, Mareisa, Maresa, Maressa, Mariesa, Mariessa, Marisela (used in Spanish too), Mariza, Marrisa, Marysia, Meris, Merisa, Meryssa, Missy, Morisa, Morysa, Myrissa, Risa, and Rissa. Other English forms include the contraction Maris, the familiar form Marysa, and the variant spellings Marissa (used in German, Italian, and Spanish too), Marrissa, Maryssa, Merissa, and Morissa.

Variant forms inherit both the origin and meaning of the name Marisa.

Marisa is an uncommon baby girl name. At the modest height of its usage in 1995, 0.115% of baby girls were given the name Marisa. It was #147 in rank then. The baby name has seen a steep decline in frequency since then, and is now of irregular use. In 2018, within the family of girl names directly linked to Marisa, Maria was the most widely used. 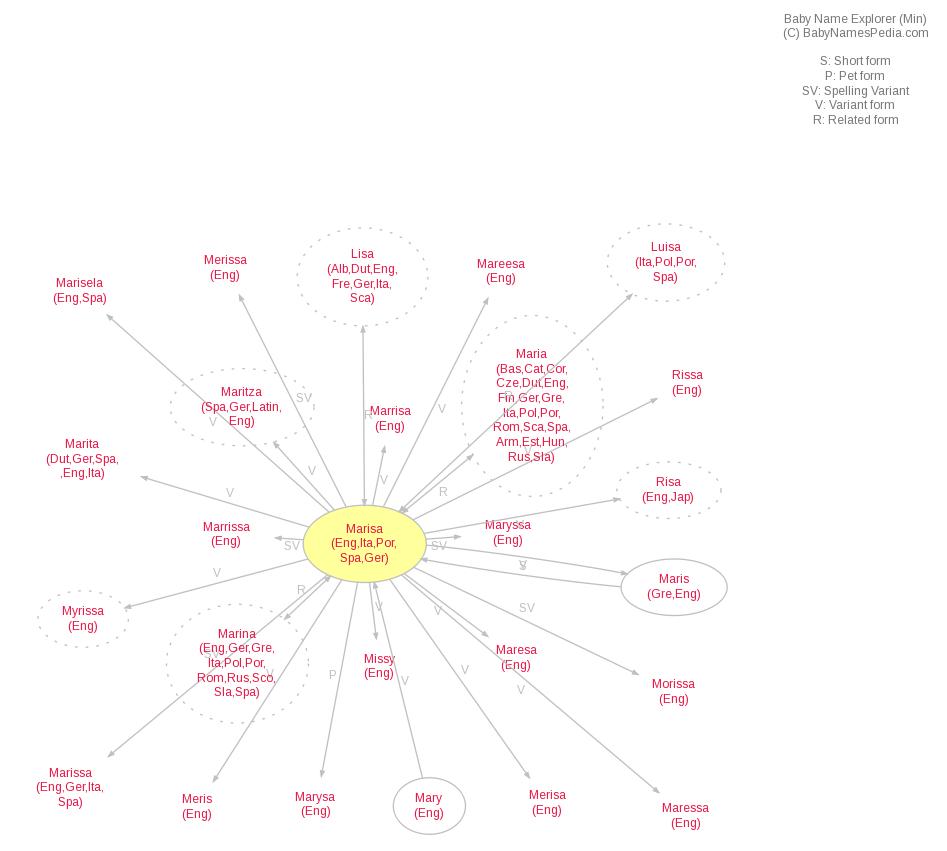