What does Marjorie mean?

[ 3 syll. ma-rjo-rie, mar-jor-ie ] The baby girl name Marjorie is pronounced as MAARJHaoR-iy- †. Marjorie is largely used in the English and Scottish languages. Its origin is Old Greek, Latin, and Hebrew. Latin origin, English use: The name first developed from Margerie (Middle English) or Margery (Middle English), the medieval English form of Margaret. The name is also taken to derive from 'marjoram', the name of the aromatic herb, since at least the 17th century. The plant name is ultimately of the Latin element 'marjorana'. The spelling Marjorie first became popular in 13th-century Scotland, made known by Robert the Bruce, who gave it to his daughter Marjorie Bruce (1296-1316).

Marjorie is a familiar form of the name Margaret (English and Scottish).

Marjorie is also a Scottish variant transcription of the name Mary (English).

Variant forms inherit the origin and meaning of Marjorie.

Marjorie is an unusual baby girl name. Its usage peaked in 1921 with 0.876% of baby girls being given the name Marjorie. It was #16 in rank then. The baby name has experienced a steep fall in popularity since then, and is now of very light use. In 2018, among the family of girl names directly linked to Marjorie, Mary was the most frequently used. 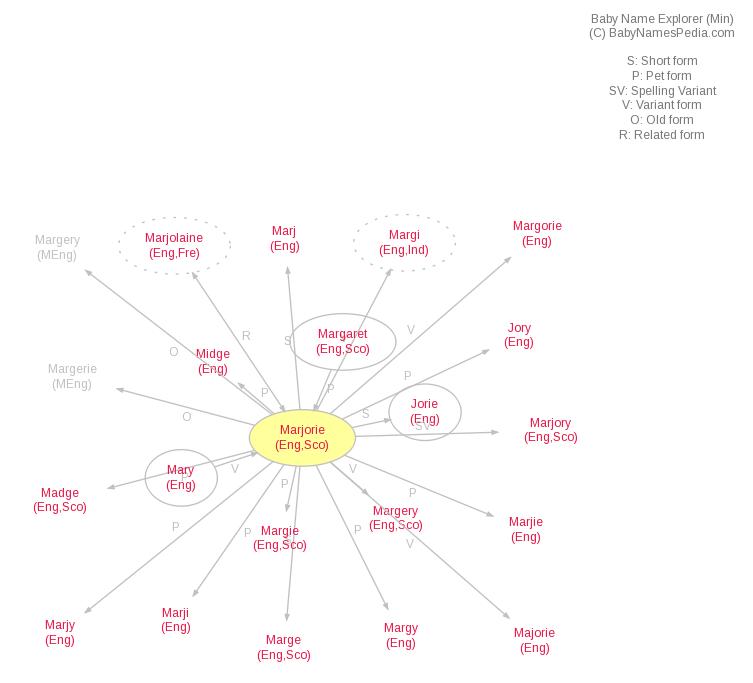