What does Marla mean?

[ 2 syll. mar-la, ma-rla ] The baby girl name Marla is pronounced MAARLaa- †. Marla's language of origin is Hebrew, English, and Germanic. It is predominantly used in English and German. The name coud have been a modern coinage as a feminine equivalent of Marlon.

In addition, Marla is an English form of Magdalena.

Marla is also an English and German contracted form of the German, Polish, and English Marlene.

Marla is also a form of the English Mary.

Marla is the feminine equivalent of the English and French Marlon.

Variant forms inherit the origin and meaning of the name Marla.

Marla is a rare baby girl name. At the modest peak of its usage in 1955, 0.086% of baby girls were named Marla. It was #193 in rank then. The baby name has suffered a steep drop in frequency since then, and is of only sporadic use now. In 2018, out of the family of girl names directly related to Marla, Mary was the most regularly used. 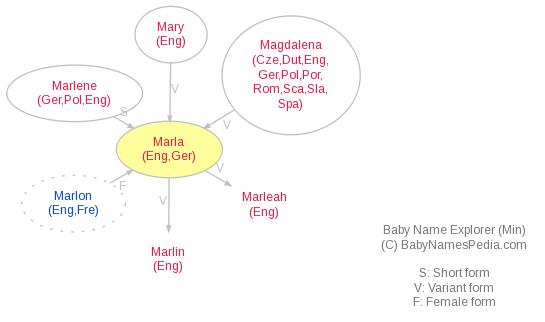