What does Marlena mean?

[ 3 syll. mar-le-na, ma-rl-ena ] The baby girl name Marlena is pronounced MaaR-LIYN-ah (English) or MaaR-LEH-Naa (Polish) †. Marlena is of Hebrew and Germanic origin, and it is used mainly in English and German.

Marlena is a variant of Magdalena in the English language.

Marlena is also a variant of Marlene (German, Polish, and English) in the English and German languages.

Marlena is rare as a baby name for girls. At the modest peak of its usage in 1978, 0.029% of baby girls were named Marlena. Its ranking then was #429. The baby name has since suffered a marked decline in popularity, and is of only irregular use today. Out of all girl names in its group, Marlena was nevertheless the most popular in 2018. 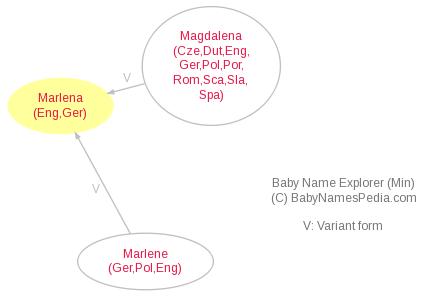