What does Marley mean?

[ 2 syll. mar-ley, ma-rl-ey ] The baby boy name Marley is also used as a girl name, and more frequently so. It is pronounced as MAARLiy- †. Marley is an English name of Old English origin. The first name is derived from the surname, which is itself of the Old English meaning 'pleasant wood', probably in reference to a place name. The first name has in modern times been bestowed in honor of the Jamaican reggae singer and songwriter Bob Marley (1945-1981). The name Marlee (English) is the female equivalent of Marley.

Marly (English variant spelling) is another form of Marley.

Marley is somewhat popular as a baby name for boys. The name's popularity has been growing since the 2010s. Its usage peaked modestly in 2014 with 0.014% of baby boys being given the name Marley. Its ranking then was #818. In 2018, its usage was 0.013% and its ranking #888, and it was the most frequently used among all boy names in its group. Marley has in the past century been predominantly given to girls. In 2017, Marley as a girl name outnumbered its use as a boy name by 7 times. 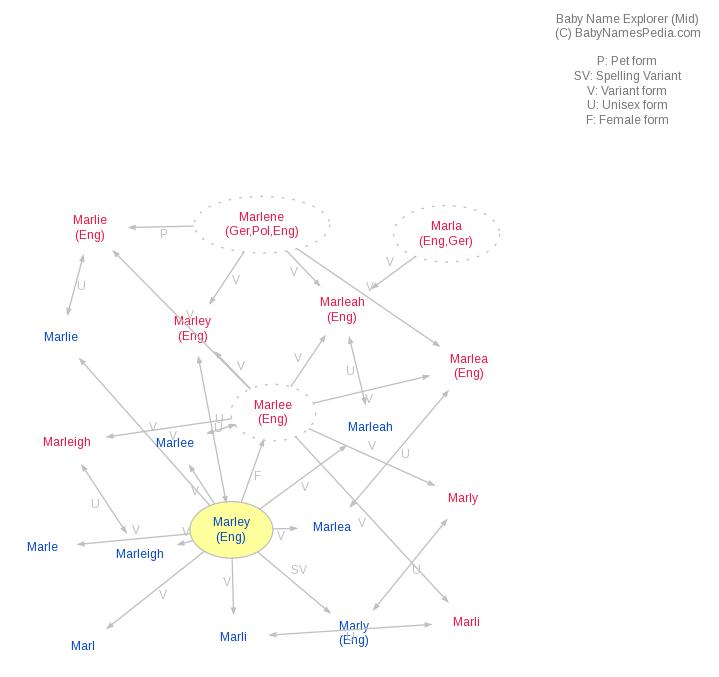