What does Marlon mean?

[ 2 syll. mar-lon, ma-rl-on ] The baby boy name Marlon is pronounced as MAARLaaN †. Marlon is used predominantly in the English and French languages, and it is derived from Hebrew, Latin, and Celtic origins. The name is of disputed origin; it was first popularized by the American actor Marlon Brando (1924-2004), who was named after his father. His family is reputed to be of French roots, so the name could possibly be derived from Marc or Marcel with the French diminutive '-lon' or '-on'. The suffix '-lon' represents a combination of the original French suffixes '-el' and '-on'. Current use of the name in France can however be traced back to an introduction from America. Other sources include the French surname Marlin, which is related to the first name Merlin; and the name Mahlon. The name Marlon is popular among Afro-Americans.

Marlon is a variant of the name Mahlon (English).

Marlon is also a variant (English) of the name Marcel (Catalan, English, French, and German).

Marlon is also a variant (English) of the name Marion (English and French).

Marlon is also a variant (English) of the name Mark (English, Dutch, Russian, and Scandinavian).

Marlon is also a variant (English and French) of the name Merlin (English, German, and Welsh).

The name Marla (English and German) is the female version of Marlon.

Both the origin and meaning of Marlon is inherited by all variant forms.

Marlon is a classic favorite. Today it is still somewhat popular as a baby name for boys, though not to the extent it was previously. The name's popularity jumped from the 1940s up to the 1970s; before that, it was of sporadic use only. At the modest height of its usage in 1972, 0.061% of baby boys were given the name Marlon. Its ranking then was #218. The baby name has since experienced a fall in popularity. In 2018, its usage was 0.013% and its ranking #851. Within the group of boy names directly linked to Marlon, Mark was the most commonly used. In 2018, its use outnumbered Marlon's by 7 times. 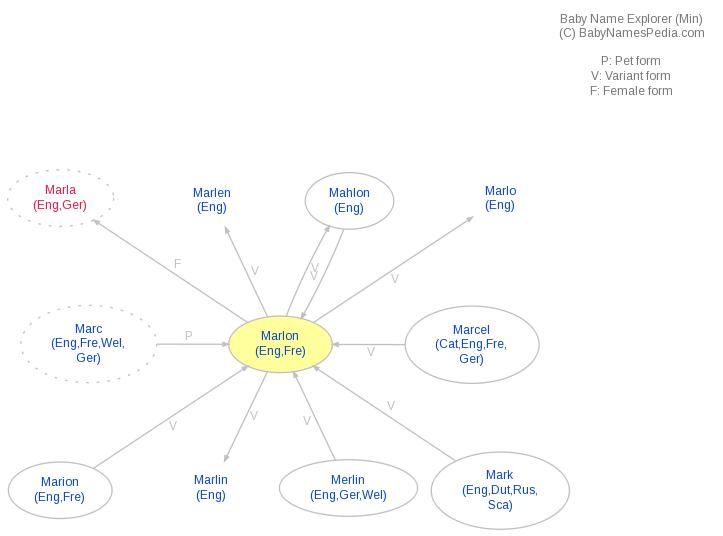