What does Marshall mean?

[ 2 syll. mar-(s)hal(l), ma-rsha-ll ] The baby boy name Marshall is pronounced as MAAR-SHahL †. Marshall is used mostly in English and its language of origin is Old English. The first name is derived from the job title 'marshall', which is itself from the Old French 'marechal', and ultimately of the Germanic elements 'marah' and 'scale' - referring to the original use of the job title for people who looked after horses. The job title was later used to refer into a usually ceremonial offical position. The name has been used by English speakers since the 19th century.

Both the origin and meaning of the name Marshall is inherited by all variant forms.

Marshall is a classic favorite. Today it is still rather popular as a baby boy name, but not to the degree it was previously. At the height of its usage in 1908, 0.096% of baby boys were named Marshall. It had a ranking of #147 then. The baby name has seen a fall in frequency since then, and in recent times it is of modest use. In 2018, its usage was 0.048% and its ranking #353, but it was nevertheless the most popular within all boy names in its family. 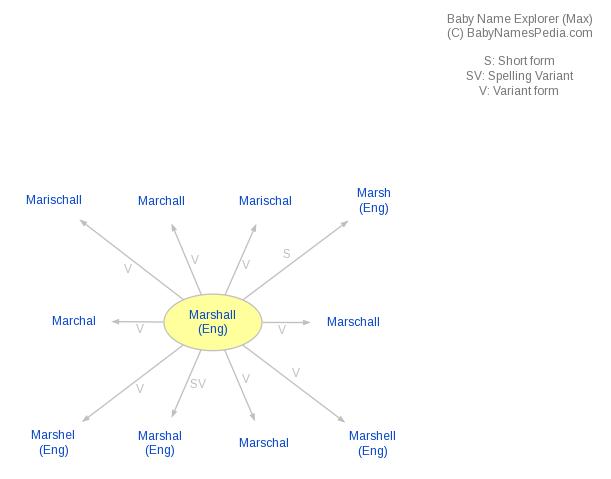