What does Martha mean?

[ 2 syll. mar-(t)ha, ma-r-tha ] The baby girl name Martha is pronounced MAAR-THah (English) †. Martha is of Aramaic origin. It is used mainly in the English, German, Greek, and Scandinavian languages. It is a biblical name derived from the word marta meaning 'lady'. The name was borne in the Bible by the sister of Lazarus and Mary of Bethany; while her sister Mary listened to Jesus' teaching, Martha busied herself with the housework and later complained to Jesus that her sister did not help in the chores. The name has therefore often been associated with the grind of domestic work. The name was borne by various saints, and was adopted by English Puritans in the 17th century. It saw a boost in popularity in 19th century USA, when it was often bestowed in honor of Martha Washington (1731-1802), wife of President George Washington.

Martha is an all-time favorite. Today it is still somewhat popular as a baby girl name, but not to the degree it was before. In 1900, 0.766% of baby girls were given the name Martha. It was #28 in rank then. The baby name has suffered a marked decline in popularity since then, and is in recent years of only modest use. In 2018, it ranked at #797 with a usage of 0.018%, but it was nonetheless the most popular out of all girl names in its family. Martha has primarily been a girl name, although in the last century it has also been used for boys. In 1941, 210 times as many girls than boys were given the name Martha. 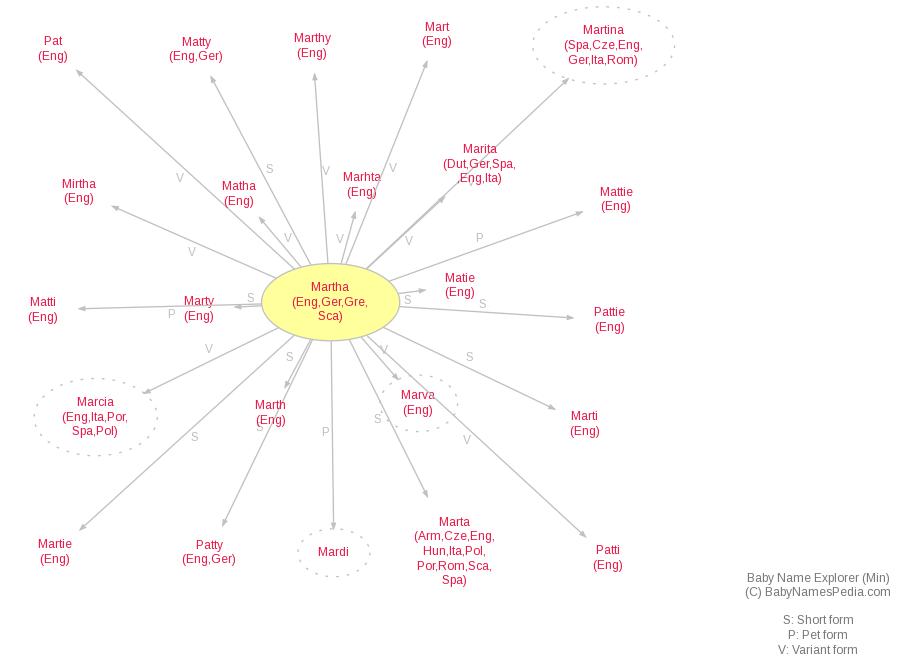