What does Martin mean?

[ 2 syll. mar-tin, ma-rt-in ] The baby boy name Martin is pronounced as MAAR-TahN in English, MaaR-TIHN in Bulgarian, MaeR-TEHN in French, MAAR-TihN in German, or MAOR-TiyN in Hungarian †. Martin is used predominantly in the English, French, German, Romanian, Russian, Scandinavian, and Slavic languages, and its origin is Latin. The name's meaning is war-like, dedicated to Mars. Its meaning is from the element 'mars'. Martinus (Latin) is an older form of Martin. The Roman nickname Martinus is derived from Mars, the name of the god of war in Roman mythology. The name was popularized in the medieval period by Saint Martin of Tours (316/317-397), famous for cutting his cloak in two to share with a beggar. The name was later borne by five popes. It was first adopted by English speakers in the 12th century. It is sometimes bestowed by Protestants in tribute to the German theologian Martin Luther (1483-1546), and among Afro-Americans in honor of the civil rights leader Martin Luther King (1929-1968). The name Martina (Spanish, Czech, English, German, Italian, and Romanian) is the female version of Martin.

What are the Variant Forms of Martin?

The name Martin is used to a great extent; it has 59 variants that are used in English and other languages. Variants used in English include Maartin, Mart, Martain, Martan, Martea, Martee, Martel (used in German as well), Martell, Martenn, Martey, Marti (used in Spanish and Swiss as well), Martial, Martine, Martinien, Marton (used in Hungarian as well), Marts, Mattin, and Mertyn. The diminutive forms Martie and Marty, and the variant spellings Marten (used in Dutch and Scandinavian as well) and Martyn (used in Russian, Ukrainian, and Welsh as well) are other English forms.

Martin is a classic favorite. Today it is still popular as a baby name for boys, though to a lesser extent than it was previously. At the modest height of its usage in 1963, 0.294% of baby boys were given the name Martin. It ranked at #62 then. The baby name has since fallen in popularity, and is in recent years of occasional use. In 2018, its usage was 0.067% and its ranking #272. Within the group of boy names directly linked to Martin, Mark was the most frequently used. In 2018, it was used 45% more than Martin. 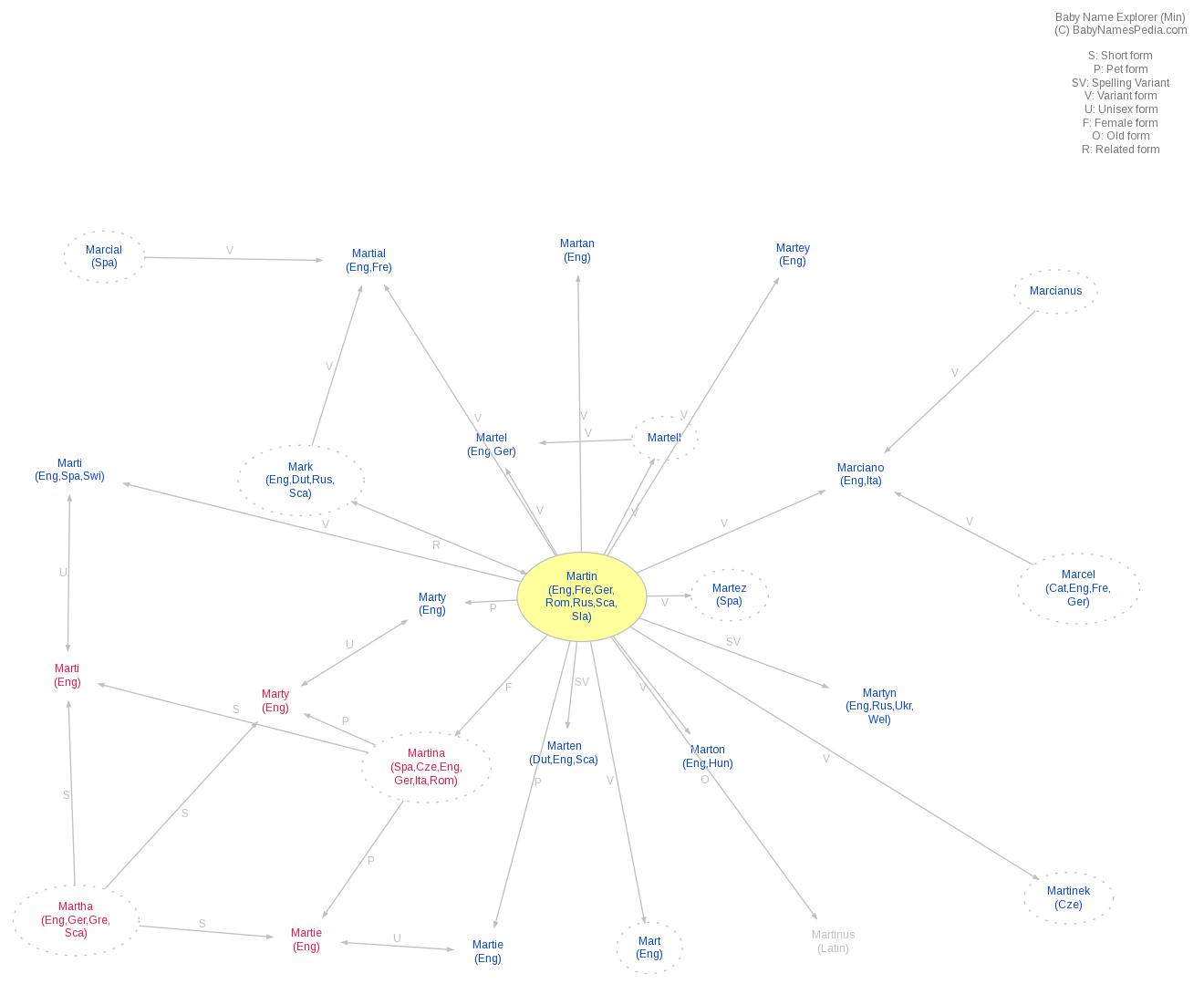