What does Martina mean?

[ 3 syll. mar-ti-na, ma-rt-ina ] The baby girl name Martina is pronounced MaaR-TIYN-ah in English or MaaR-TIY-Naa in Italian and Spanish †. Martina's origin is Aramaic and Latin, and its use, Spanish, Czech, English, German, Italian, and Romanian. From Latin roots, its meaning is 'war-like, dedicated to Mars' - in this context, Martina can be used in the Czech, English, German, Italian, Romanian, and Spanish languages. Its meaning is derived from the word mars. The name was first used by the Romans. It was borne by a little-known saint in the 3rd century. It was later adopted by English speakers in the mid 19th century; in the 20th century it saw a boost in popularity from the fame of the Czechoslovakia-born US tennis player Martina Navratilova (1956-).

In addition, Martina is a Spanish form of the English, German, Greek, and Scandinavian Martha.

Martina is the feminine equivalent of the English Mart and the English, French, German, Romanian, Russian, Scandinavian, and Slavic Martin.

The name Martina is widely used; it has 36 forms that are used in English and foreign languages. English forms of the name include Marta, Martana, Martean, Marteana, Marteane, Marteen, Marteena, Marteene, Martel, Martella, Martelle, Martene, Marthena, Marthina, Marthine, Martine (also used in French and German), Martinia, Martiniana, Martinne, Martino, Martisha, Martosia, Martoya, Martricia, Martrina, Martyne, Martynna, and Martynne. Other English variants include the shortening Marti, and the familiar forms Ina (also used in Dutch and Japanese), Martie, Marty, and Tina (also used in Scandinavian, and Spanish). The Polish Martyna is a form of Martina that is used in foreign languages. The familiar forms Maartje (Dutch) and Martje (Frisian and German) are other foreign variants.

Martina is an uncommon baby girl name. At the modest height of its usage in 1984, 0.018% of baby girls were named Martina. It was #578 in rank then. The baby name has fallen from favor since then, and is of only sporadic use now. In 2018, within the family of girl names directly related to Martina, Martha was the most frequently used. 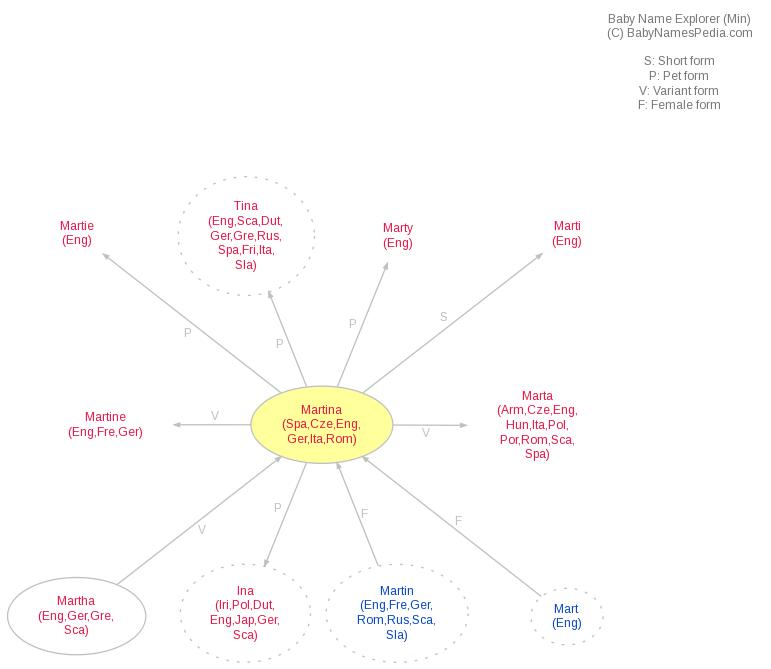