What does Marvin mean?

[ 2 syll. mar-vin, ma-rv-in ] The baby boy name Marvin is pronounced in English as MAAR-VihN †. Marvin is of Welsh origin, and it is used mainly in the English and German languages. The first name is derived from the English surname, which is itself of the medieval Merfyn (Welsh), comprising of the elements mer and myn (meaning 'eminent, great'). The name Merfyn was borne by an obscure 9th-century Welsh king. Through Middle English, the syllable '-er-' was altered to '-ar-'. An alternative derivation is from Maerwine (Old English), of the meaning 'famous friend'. The first name was adopted by English speakers in the 19th century. It is popular among Afro-Americans, where it is often bestowed in honor of the singer Marvin Gaye (1939-1984), who gained international fame as an artist on the Motown label.

Marvin is an English variant transcription of Mervyn (English and Welsh).

What are the Variant Forms of Marvin?

Marvin is an all-time favorite. Currently it is still fairly popular as a baby name for boys, though not to the extent it was in the past. Its usage peaked modestly in 1931 with 0.407% of baby boys being given the name Marvin. It ranked at #45 then. The baby name has since experienced a marked decline in popularity, and is of only occasional use now. In 2018, it ranked at #580 with a usage of 0.025%, but it was nonetheless the most regularly used among all boy names in its group. 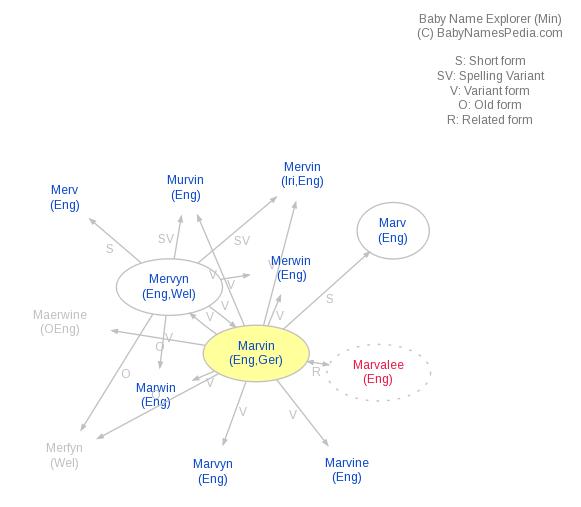