What does Mary mean?

Mary is of Hebrew origin and it is used mainly in English. The meaning of Mary is 'sea of bitterness; rebelliousness; wished-for child; to swell'. The origin of the name is disputed; it could be from mirjam. Other suggested meanings for the name include 'rebelliousness', 'wished-for child', or 'to swell' in reference to a pregnant mother. The name could also be of Old French, Egyptian, or Latin origin. Via the Hebrew derivation, the name originated as a Middle English Anglicized form of Marie, itself from Maria (Latin and Old Greek), which is from Mariam (Old Greek) and Mariamne (Hebrew), and ultimately from Maryam (Aramaic) and Miryam (Hebrew).

The name was borne by six characters in the New Testament of the Bible, most notably Mary the mother of Jesus; to the Catholics she is known as the Virgin Mary. Other central figures in the Bible include Mary the sister of Lazarus and Martha, who sat and listened to Jesus at her house, and Mary Magdalene, a devoted disciple of Jesus. Due to its biblical associations with the mother of Jesus, the name was borne by various early saints, although for the same reason the name was for a few centuries considered too holy to be used for secular naming purposes in some cultures.

It was later adopted across Europe from the medieval period; in the 16th century the popularity of the name dipped somewhat due to the Puritans' association of the name with Roman Catholicism, as well as the notoriety of Mary I of England (1516-1558), known also as Mary Tudor or Bloody Mary, who persecuted hundreds of religious dissenters. The name later saw a revival in the 17th century. The name was also borne by other members of royalty, inluding Mary II of England (1662-1694) and Mary Queen of Scots (1542-1587). For Gaelic forms, the Irish Muire and the Scottish Moire are reserved only for the Virgin Mary, while other forms are available for naming purposes.

What are the Variant Forms of Mary?

Mary's language of origin is Egyptian. It is from the word 'mry' meaning beloved. The name could be derived from the Egyptian root word 'mry' and it could mean 'beloved of Amun' in reference to the Egyptian god.

Mary's language of origin is Latin. It is from stella maris meaning 'star of the sea' ; stilla maris 'drop of the sea'. According to Saint Jerome, the name is derived via the Hebrew Miriam, from the Latin 'stella maris' and ultimately stilla maris.

Mary's language of origin is French. Meaning: 'pregnant mother'. It is derived from the word mere which means 'mother'. The name could be from the French 'mere' in reference to a pregnant mother.

Mary's language of origin is Spanish. Meaning: pregnant mother. It is derived from the word 'madre' meaning mother.

Mary is an English variant transcription of Maria.

Mary is a classic favorite. Currently it is still popular as a baby girl name, but not as much as it was in the past. Its usage peaked in 1922 with 5.785% of baby girls being given the name Mary. It was #1 in rank then. The baby name has substantially fallen in popularity since then, and is now used on a modest scale. In 2018, its usage was only 0.126% and its ranking #126, but it was nonetheless the 3rd most popular after Mia and Maria, among all girl names in its family. In 2018, Mia was 5 times more frequently used than Mary. 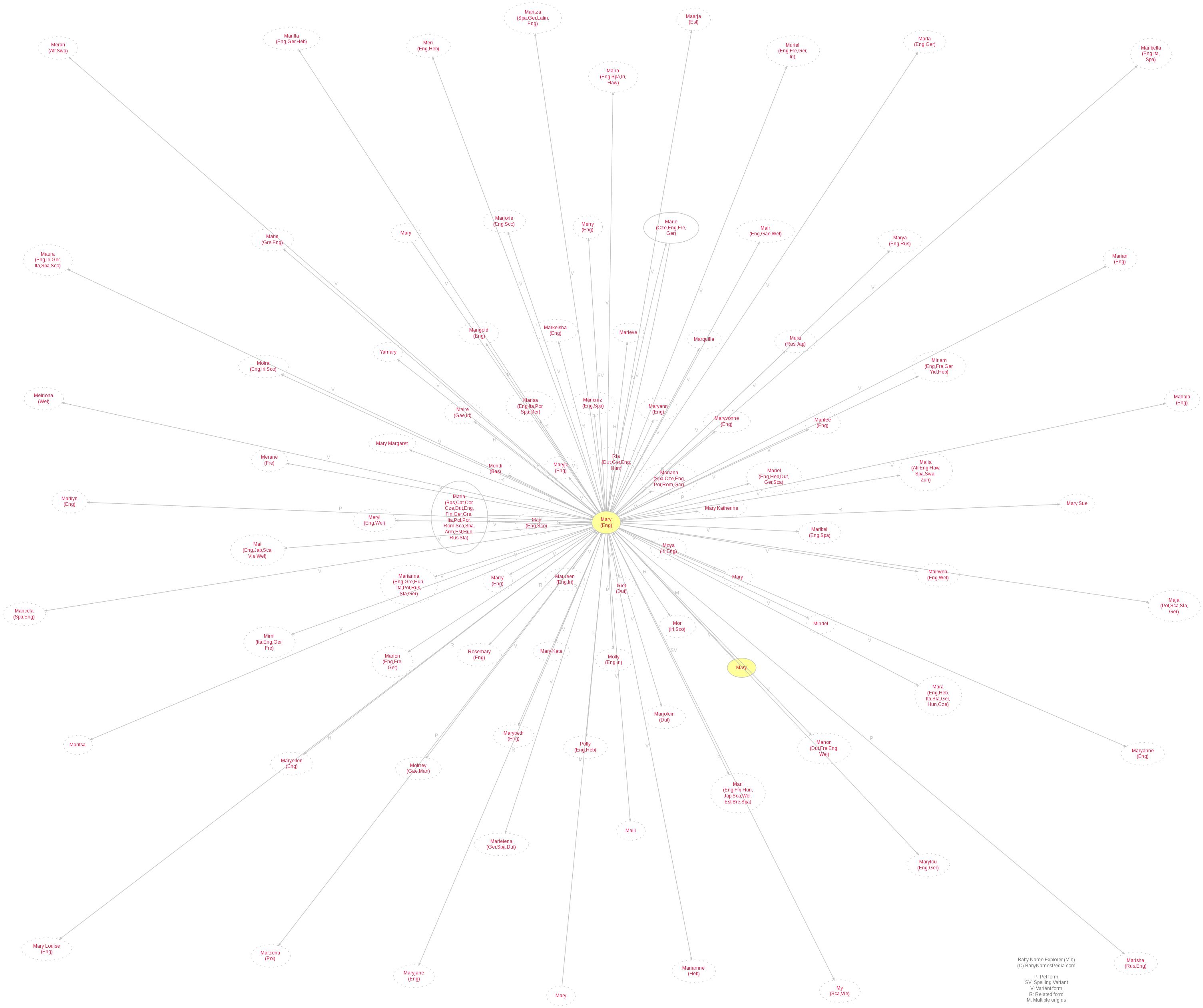