What does Matias mean?

Matias is a variant form of the English name Matthew in the English, Finnish, German, Portuguese, and Spanish languages.

Matias is also a variant spelling of the English, German, French, and Greek name Matthias in the English, Finnish, and Spanish languages.

Matias is popular as a baby name for boys, and it is also viewed as trendy. The name has been growing in popularity since the 2000s; prior to that, it was of sporadic use only. Its usage peaked modestly in 2018 with 0.104% of baby boys being given the name Matias. Its ranking then was #201. Among all boy names in its group, Matias was the 2nd most popular after Matthew in 2018. Its use outnumbered Matias' by 5 times in that year. 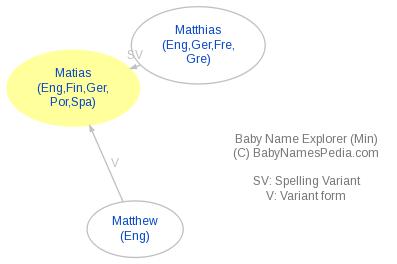