What does Matteo mean?

[ 2 syll. mat-teo, ma-tt-eo ] The baby boy name Matteo is pronounced as Maa-T-ow- †. Matteo is used predominantly in the Italian and Spanish languages, and its origin is Hebrew.

In addition, Matteo is a variation (Italian and Spanish) of the name Matthew (English).

The name Maceo (English and Italian) is a variation of Matteo.

The origin and meaning of Matteo is inherited by all variant forms.

Matteo is a popular baby name for boys, and it is also viewed as trendy. The name's popularity has been rising since the 1990s; before that, it was of infrequent use only. At the modest peak of its usage in 2016, 0.118% of baby boys were given the name Matteo. Its ranking then was #168. In 2018, its usage was 0.108% and its ranking #196. Out of the group of boy names directly linked to Matteo, Matthew was the most commonly used. In 2018, its use outnumbered Matteo's by 5 times. 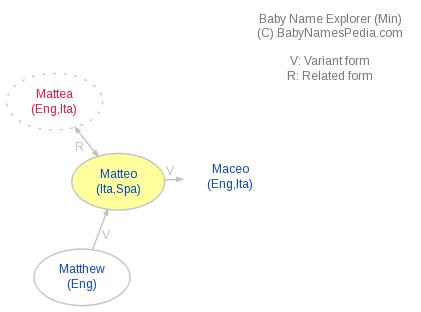