What does Matthias mean?

[ 3 syll. mat-(t)hias, ma-tthi-as ] The baby boy name Matthias is pronounced as Mah-THAY-ahS in English or Maa-TIY-aaS in German †. Matthias is used mostly in English, German, French, and Greek. Its language of origin is Hebrew. The name was borne in the Old Testament of the Bible by several persons, in various forms such as Mattaniah, Mattathah, Mattathias, and Mattithiah. The name Matthias is used in the Authorized Version of the Bible to distinguish the disciple chosen to replace Judas Iscariot from the evangelist and apostle Matthew, also the author of the first Gospel. The name saw a moderate increase in use among English Puritans in the 17th century.

Matthias is a derivative (English and German) of the English name Matthew.

Both the origin and meaning of the name Matthias is inherited by all variant forms.

See also the related forms, the German Jahwe and the English Macy.

Matthias is a rather popular baby boy name, and it is also perceived as trendy. The name has been increasing in popularity since the 2000s; prior to that, it was of infrequent use only. At the modest height of its usage in 2018, 0.040% of baby boys were named Matthias. It was #407 in rank then. In 2018, within the family of boy names directly related to Matthias, Matthew was the most widely used. It was 13 times more commonly used than Matthias in that year. 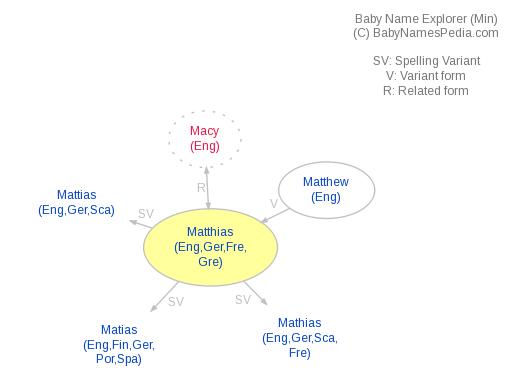