What does Maura mean?

Maura's language of origin is Latin. It is predominantly used in German, Irish, Italian, and Spanish. It is derived from the word maurus which is of the meaning 'swarthy, dark skinned, moor'. From the Roman nickname. Maura is the feminine form of the Spanish, Italian, and Portuguese Mauro.

Maura has 15 forms that are used in English and foreign languages. English forms of the name include Maurah, Maure, Mauree, Maurette, Mauri, Mauricette, Maurie, Maurita, Mauritia, Maury, and Maurya. Another English form is the spelling variant Mora. Forms used in foreign languages include the French Maurane, the French Maurine, and the Russian Mavra.

Maura is used predominantly in the English, Irish, and Scottish languages. Its origin is Celtic. The name was borne by the 4th-century Saint Maura, who was martyred along with her companion Britta.

Maura is also a form of the English, Irish, and Scottish Moira.

Maura is rare as a baby girl name. At the modest peak of its usage in 1964, 0.022% of baby girls were given the name Maura. It had a ranking of #468 then. The baby name has markedly declined in popularity since then, and is currently of infrequent use. Out of the family of girl names directly linked to Maura, Mary was the most commonly used in 2018. 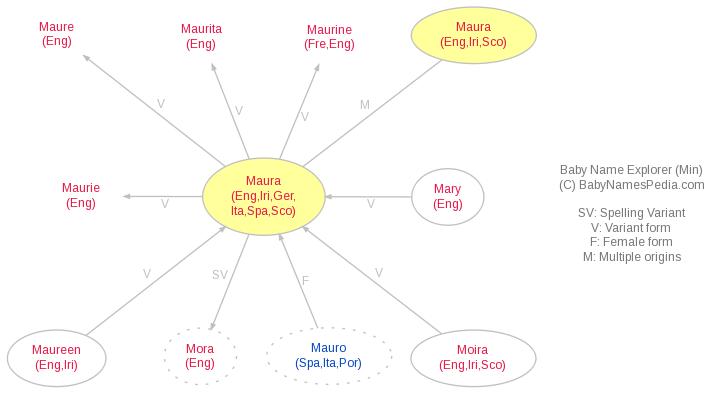