What does Maureen mean?

[ 2 syll. mau-ree(n), ma-ure-en ] The baby girl name Maureen is pronounced MaoR-IY-N †. Maureen's language of origin is Hebrew and Celtic, and it is used largely in the English and Irish languages. From Celtic roots, its meaning is 'little Mary' - in this context, Maureen can be used in the English language. Maureen is the Anglicized form of Máirín.

Maureen is a variant of Mary (English) in the English and Irish languages.

Maureen has 23 variants that are used in English and foreign languages. Variants used in English include Mairin, Mairina, Maura, Maure, Maurean, Maureane, Maurianne, Maurina, Maurya, Mavra, Moira, Mora, Morene, Morine, Morreen, and Moureen. Other English forms include the contraction Mo, the pet forms Maurie, Moreen (used in Irish too), and Reenie, and the variant spellings Maurene and Maurine. Morena (Spanish) is a variant of Maureen that is in foreign languages.

Maureen is rare as a baby name for girls. At the modest peak of its usage in 1948, 0.234% of baby girls were given the name Maureen. Its ranking then was #88. The baby name has since suffered a substantial drop in popularity, and is of only irregular use today. In 2018, out of the group of girl names directly linked to Maureen, Mary was the most frequently used. 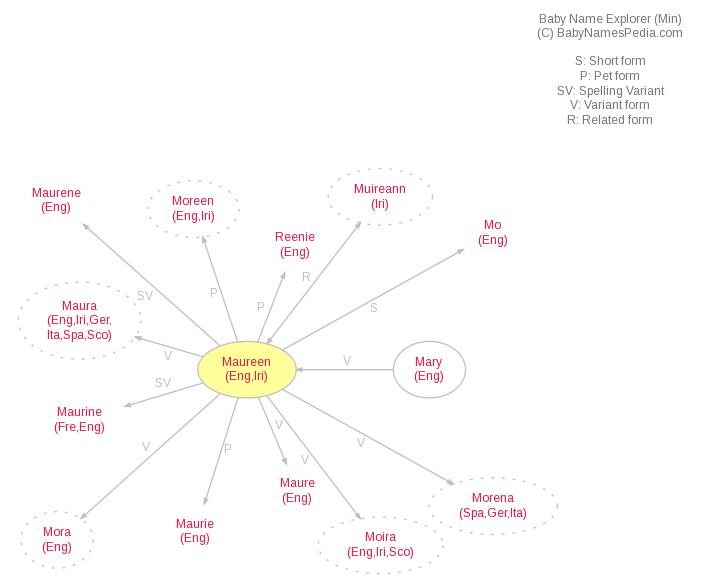