What does Maurice mean?

Maurice is used chiefly in the English and French languages, and it is derived from Latin origins. Mauricius (Latin) and Mauricus (Latin) are older forms of Maurice. The first name is derived from the Roman nickname Mauricius, a derivative of the name Maurus and the element 'maurus' (meaning swarthy, dark skinned, moor). It was borne by Saint Maurice (-287), the leader of the legendary Roman Theban Legion who was martyred under Maximian for refusing to worship Roman gods. He was subsequently venerated as the patron saint of soldiers. The name was also borne by a 6th-century Byzantine emperor.

The name was introduced by the Normans into England in the form Meurisse, and was relatively popular in the Middle English era in the form Morris. It was later borne in the 16th century by members of the ducal families of Saxony, notably Maurice of Nassau (1567-1625), the Prince of Orange who helped to found the Dutch Republic.

The name saw a moderate increase in use in the mid-19th century. It is sometimes taken as a French name in the USA and Britain, owing to the fame of the charming Belgian-French actor and singer Maurice Chevalier (1888-1972). In the USA, the name Maurice is often pronounced like a French name with the stress on the last syllable, while in the UK the name is pronounced no differently from the form Morris. In literature, the name has been borne by the titular character of the E. M. Forster novel Maurice (1913). The name Maurizia (Italian) is the female form of Maurice.

What are the Variant Forms of Maurice?

Maurice is of Celtic origin and it is used mainly in the Irish language. It is derived from muir meaning 'sea' ; gus 'choice; vigor, strength'. Old forms of Maurice include Muirgheas (Old Irish) and Muirgheos (Old Irish).

Maurice is an all-time favorite. Currently it is still fairly popular as a baby name for boys, though it was in more widespread use before. At the modest peak of its usage in 1913, 0.185% of baby boys were given the name Maurice. Its ranking then was #95. The baby name has since experienced a decline in frequency, and is of only occasional use now. In 2018, it ranked at #670 with a usage of 0.019%, but it was nonetheless the 2nd most popular after Mauricio, out of all boy names in its group. It was 21% more popular than Maurice in 2018. 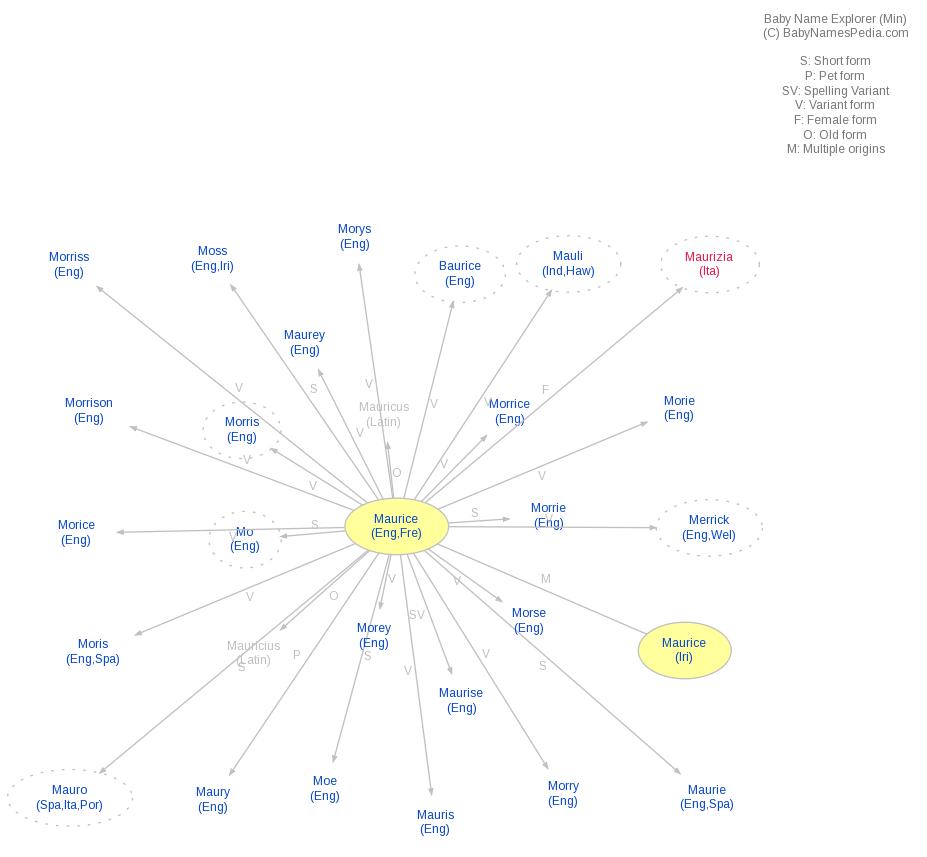