What does Mauro mean?

[ 2 syll. mau-ro, ma-uro ] The baby boy name Mauro is pronounced as MAW-Row in Italian †. Mauro is used chiefly in the Spanish, Italian, and Portuguese languages, and it is derived from Latin origins. It is derived from the element 'maurus' meaning swarthy, dark skinned, moor. Maurus (Latin) is an older form of Mauro. The name was borne by a dozen early saints.

Mauro is a short form of the name Maurice (English and French) in the Spanish language.

The name Maura (English, Irish, German, Italian, Spanish, and Scottish) is the female form of Mauro.

The names Maur and Maurio are variants of Mauro.

Maurilio (Italian pet form) is another variant of Mauro.

Mauro is uncommon as a baby name for boys. At the modest height of its usage in 1974, 0.004% of baby boys were given the name Mauro. Its ranking then was #995. The baby name has since experienced a fall in popularity, and is today of sporadic use. In 2018, within the group of boy names directly linked to Mauro, Maurice was the most popular. 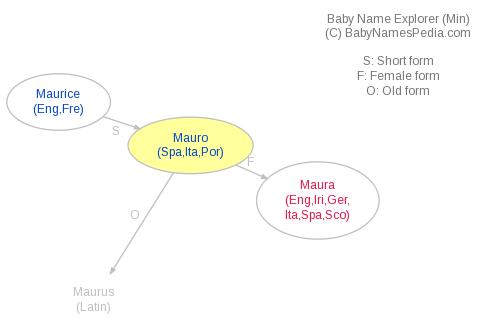