What does Mavis mean?

[ 2 syll. ma-vis, mav-is ] The baby girl name Mavis is also used as a boy name, though the use for girls is far more popular. It is pronounced as MEY-VihS †. Mavis' language of origin is Celtic and Old French. It is predominantly used in English, French, and Scottish. From Old French roots, its meaning is 'mavis, song thrush' - in this context, Mavis can be used in the English and Scottish languages. The first name is derived from mavis, the English dialectal name of the song thrush, itself from the Old French mauvis and possibly of ultimate Breton origin. The first name was adopted by English speakers in the late 19th century, promoted by the appearance of the character Mavis Clare in the Marie Corelli novel The Sorrows of Satan (1895).

Mavis is an all-time favorite. At present it is still a somewhat popular baby girl name, but not as much as it was in the past. Its usage peaked modestly in 1927 with 0.049% of baby girls being named Mavis. It was #270 in rank then. The baby name has steeply slipped in popularity since then, and is in recent times of only infrequent use. In 2018, it ranked at #883 with a usage of 0.017%. Among the family of girl names directly related to Mavis, Maeve was the most popular. The name was thrice as popular as Mavis in 2018. In the last century Mavis has primarily been a baby girl name. 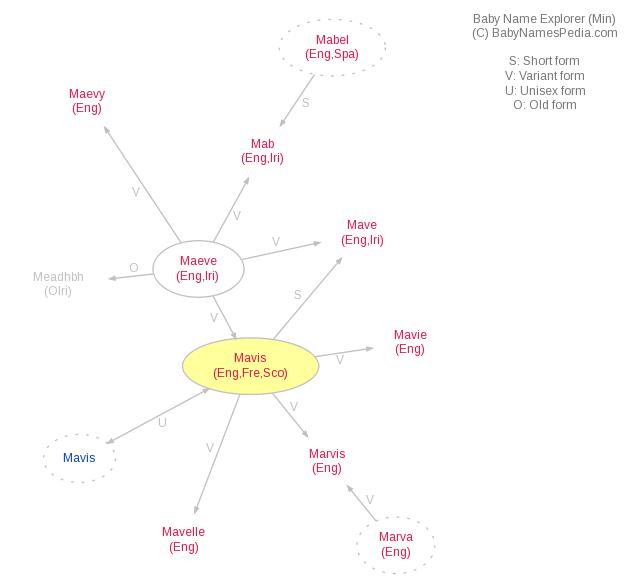