What does Maximilian mean?

[ 5 syll. ma-xi-mi-lian, max-imili-an ] The baby boy name Maximilian is pronounced as MaeK-Sih-MIHL-iy-ahN or MaeK-Sih-MIHL-YahN (English) or MaaK-Siy-MIY-Liy-aaN (German) †. Maximilian is largely used in the English and German languages, and its origin is Latin. It is from the element 'maximus' which means greatest. Maximilanus (Latin) and Maximilianus (latin) are old forms of Maximilian. The first name is derived from the Latin Maximilanus, itself a diminutive of Maximus.

It was borne by the 3rd-century Saint Maximilian, considered by Roman Catholics as one of the Fourteen Holy Helpers; there was also another saint of the same name in the 3rd century. The name was bestowed by the Emperor Friedrich III on his son, the future Maximilian I (1459-1519), from the combination of Maximus and Aemilianus in homage to the legendary Roman generals Quintus Fabius Maximus and Publius Cornelius Scipio Aemilianus. The name was borne by several members of the Austrian branch of the royal house of Habsburg, as well as the house of Bavaria from the 16th century. It was also borne by the Austrian-born Emperor of Mexico, Maximilian (1832-1867), who was later overthrown and executed. The first name was adopted by English speakers at the start of the 17th century; in the late 19th century the form Max emerged as an independant name. The name Maximiliane (German) is the female equivalent of Maximilian.

What are the Variant Forms of Maximilian?

The name Maximilian is widely used; it has 56 variants that are used in English and other languages. Variants used in English include Mac, Macimilian, Mack, Maksimillian, Maksym (used in Polish and Russian too), Mancho, Maxamilian, Maxamillion, Maxanen, Maxemilian, Maxemilion, Maxemillian, Maxime, Maximili, Maximilia, Maximilianos, Maximilianus, Maximillano, Maximillia, Maximillien, Maximillion, Maximous, Maximus, Maxinen, Maxmilian (used in Czech too), Maxmillion, Maxon, Maxy, Maxymilian, and Maxymillian. The contractions Max (used in German too) and Maxie (used in Spanish too), and the variant spelling Maximillian (used in German too) are other English forms.

Maximilian is a fairly popular baby name for boys. The name's popularity jumped from the 1980s up to the 2000s; before that, it was of very modest use only. At the peak of its usage in 2008, 0.051% of baby boys were given the name Maximilian. It ranked at #300 then. The baby name has since experienced a fall in popularity. In 2018, its usage was 0.035% and its ranking #448. Out of the group of boy names directly linked to Maximilian, Max was the most frequently used. In 2018, it was used 4 times more than Maximilian. 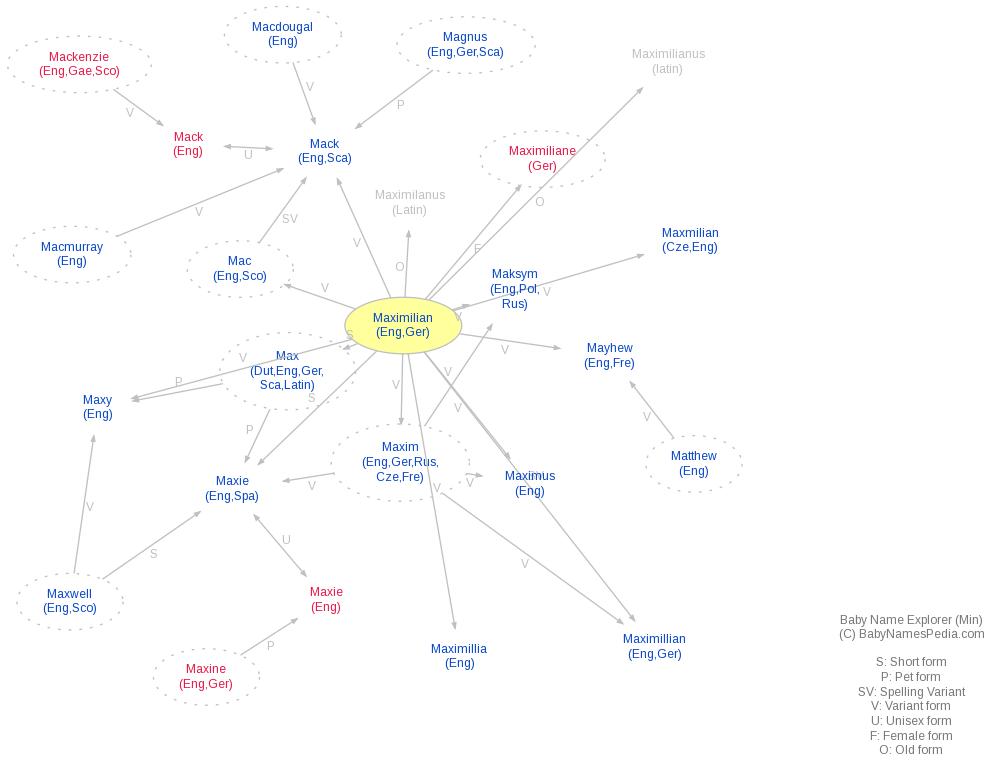