What does Maxine mean?

[ 2 syll. ma-xi-ne, max-ine ] The baby girl name Maxine is pronounced as MaeS-IY-N †. Maxine's language of origin is Latin. It is predominantly used in English and German. The name Maxine means 'greatest'. The name developed as a feminine equivalent of Max in the early 20th century.

In addition, Maxine is a form of the German Maximiliane in the English and German languages.

Maxine is the feminine form of the Dutch, English, German, Scandinavian, and Latin Max.

The name Maxine is widely used; it has 28 forms. Forms of the name include Jaxine, Maxa, Maxanda, Maxea, Maxeen, Maxena, Maxence, Maxima, Maxime, Maximina, Maxina, Maxyn, Maxyne, May, Mazeene, Mazin, Mazina, Mazine, Mazyn, Mazyne, and Máxima. Other English forms include the shortenings Max and Maxi (used in German and as well), the diminutives Maxie, Maxy, Micki, and Mickie, and the spelling variant Maxene.

Maxine is an all-time favorite. At present it is still a somewhat popular baby girl name, but not as much as it was in the past. Its usage peaked in 1923 with 0.288% of baby girls being named Maxine. It had a ranking of #76 then. The baby name has steeply dropped in popularity since then, and is in recent times of only very modest use. In 2018, it ranked at #847 with a usage of 0.017%, but it was nevertheless the most regularly used among all girl names in its family. 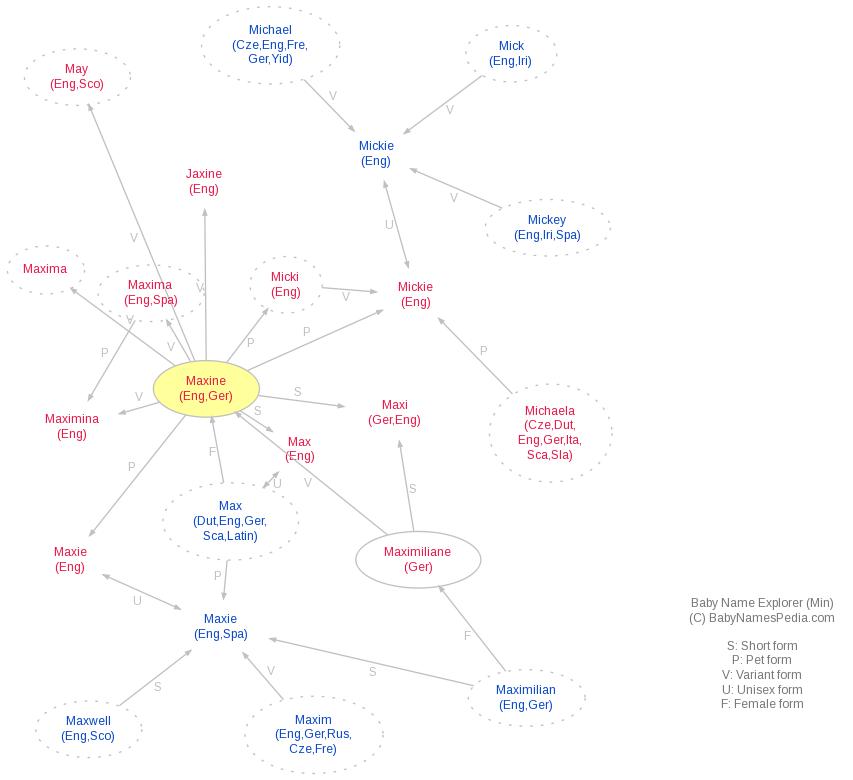