May - Meaning of May

What does May mean?

[ 1 syll. may, ma-y ] The baby girl name May is also used as a boy name, though it is far more popular for girls. It is pronounced MEY- †. May is of Old Greek, Hebrew, Latin, and English origin. It is used mainly in English and Scottish. English origin, English use: Its meaning is literally from the vocabulary word May. The first name is derived from the name of the month, which is itself from the Roman name Maia, from Maia Maiestas, the goddess of spring in Roman mythology. It is also derived from a flower name, in reference to the hawthorn that blossoms in May. It was adopted by English speakers in the late 19th century. In the early 20th century, it was popularized by the wife of George V, Queen Mary (1867-1953), also known in vernacular as May.

In addition, May is a familiar form of the English and Scottish Margaret.

May is also a familiar form of the English Mary.

May is also a form of the English and German Maxine.

May is rare as a baby girl name. In 1900, 0.234% of baby girls were named May. It was #91 in rank then. The baby name has markedly dropped in popularity since then, and is currently used only on a very modest scale. Out of the family of girl names directly related to May, Maya was the most widely used in 2018. May has in the last century been primarily given to baby girls. In 1903, 36 times more baby girls than boys were given the name May. 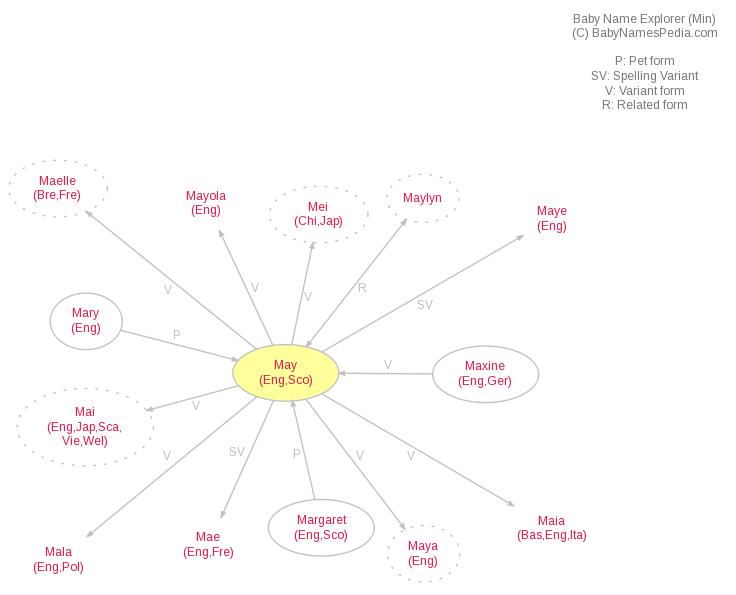