What does Melba mean?

Melba is used predominantly in the English and Spanish languages. Its origin is English. The given name was first adopted in honor of the Australian opera singer Nellie Melba (1861-1931), who got her stage name Melba from the name of the city of Melbourne where she was born. She gave her name to various foods such as the Melba sauce, the Melba toast, and the Peach Melba.

The origin and meaning of Melba is inherited by all variant forms.

Melba is an unusual baby name for girls. Its usage peaked modestly in 1932 with 0.079% of baby girls being named Melba. It ranked at #206 then. The baby name has since fallen from favor, and is used only on an infrequent scale today. Among all girl names in its group, Melba was nevertheless the most regularly used in 2018. 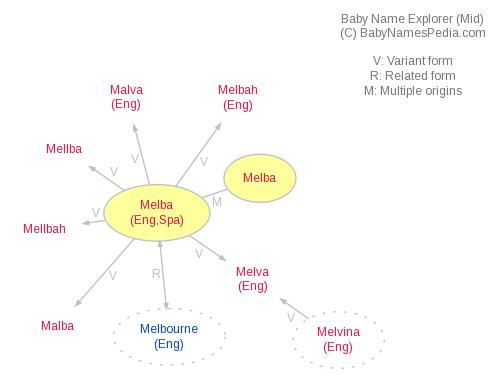