What does Melina mean?

[ 3 syll. me-li-na, mel-ina ] The baby girl name Melina is pronounced as Meh-LIY-Naa- †. Melina has its origins in the Latin and Old Greek languages. It is used largely in English, German, Greek, and Italian. Latin origin: It is derived from the word mel which is of the meaning 'honey'. The name could also have developed as a diminutive of other names such as Melissa and Melinda, from the combination of Mel and the suffix '-ina'. It was adopted by English speakers in the 19th century.

Melina is a contracted form of Melinda (English and German).

Melina is also a variant of Melissa (English and German) in the English language.

The name Melina is used to a great extent; it has 22 variants that are used in English and foreign languages. English variants of the name include Mallina, Melaina, Meleana, Meleane, Meleda, Meleena, Melena, Melene, Meleta, Melibella, Melibelle, Melinia, Melinna, Mellea, Melleta, Mellina, Mellona, Melyna, Melyne, and Melynna. Meline (Armenian and German) and Méline (French) are variants of Melina that are used in foreign languages.

Melina is rather popular as a baby girl name. The name's popularity has been growing since the 1980s. Its usage peaked modestly in 2009 with 0.034% of baby girls being named Melina. It was #456 in rank then. In 2018, it ranked at #630 with a usage of 0.025%. Among the family of girl names directly related to Melina, Melissa was the most commonly used. The name was twice as popular as Melina in 2018. 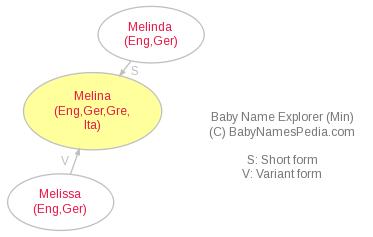