What does Melody mean?

[ 3 syll. me-lo-dy, mel-ody ] The baby girl name Melody is pronounced as MEH-LowDiy- †. Melody is used chiefly in the English language and its origin is also English. The English word 'melody' is itself from the Greek elements 'melos' and 'aeidein'. The name was adopted by English speakers from the end of the 18th century, probably due to its pleasant connotations. In the 20th century, its adoption was boosted by association from the general popularity of girl names starting with 'Mel-'. It was also made known by the British science fiction TV series Captain Scarlet and the Mysterons (1967-1968), in which the five female pilots were codenamed Melody, Destiny, Symphony, Rhapsody, and Harmony.

Variant forms share the origin and meaning of Melody.

Melody is a popular baby name for girls, and it is also viewed as fairly trendy. The name's popularity jumped from the 1940s up to the 1960s; before that, it was of very modest use only. Its usage peaked in 1960 with 0.132% of baby girls being given the name Melody. It ranked at #153 then. The baby name has since experienced a fall in popularity. In 2018, its usage was 0.115% and its ranking #137, but it was nonetheless the most frequently used among all girl names in its group. 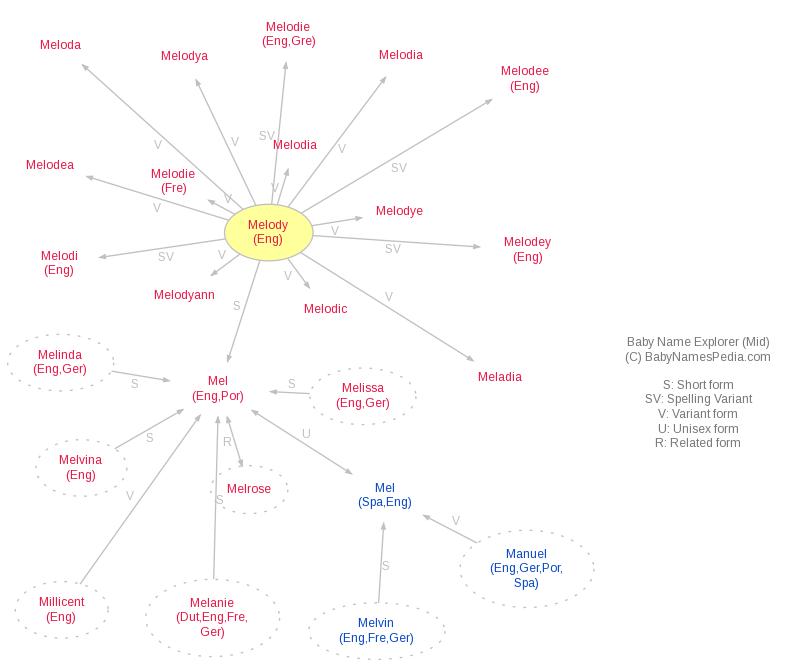