What does Melville mean?

[ 2 syll. mel-vil-le, me-lvi-lle ] The baby boy name Melville is pronounced as MEHLVahL †. Melville is mainly used in the English and Scottish languages. It is of Old French origin. It is from the words 'malle' meaning bad ; 'ville' village, settlement. The first name is derived from an old Scottish and English family name, itself derived via a Norman baronial name from the Norman French place name Malleville, meaning 'bad village', possibly in reference to a settlement on infertile land. The surname was first taken to Scotland in the 12th century, and the given name was first adopted in the 19th century, also in Scotland.

Melville is unusual as a baby boy name. Its usage peaked in 1902 with 0.011% of baby boys being given the name Melville. It had a ranking of #575 then. The baby name has markedly declined in popularity since then, and is today used on a very modest scale. Among the family of boy names directly linked to Melville, Melvin was the most widely used in 2018. 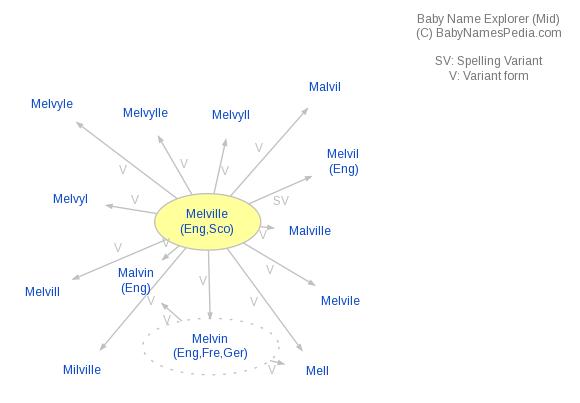