What does Mercy mean?

[ 2 syll. mer-cy, me-rcy ] The baby girl name Mercy is pronounced as M-ERSiy- †. Mercy is used predominantly in English, and its origin is Latin and English. English origin: The name is derived from the common English word 'mercy', which is itself from the Latin 'merces' (meaning reward, wages) and ultimately 'merx' (goods, wares). It was a popular virtue name adopted by 17th-century Puritans, in reference to the connotations of God's magnanimity and forgiveness. It has appeared in John Bunyan's A Pilgrim's Progress (1684), as well as in Charles Dickens' Martin Chuzzlewit (1844), in which Merry is a diminutive of Mercy.

In addition, Mercy is a contracted form (English) of the name Mercedes (Basque, English, French, German, Italian, and Spanish).

Mercy has 22 variations that are used in English and other languages. English variations include Merce, Mercea, Mercee, Mercena, Mercey, Mercilla, Mercille, Mercina, Mersee, Mersey, Mersi, Mersie, Mersina, Mersy, Mircea, Mircie, and Mircy. Other English forms include the contracted form Mer, the pet form Merry, and the spelling variants Merci and Mercie. A variation of Mercy used in other languages is Mercia (Latinized).

Mercy is somewhat popular as a baby name for girls, and it is also regarded as trendy. The name's popularity has been increasing since the 2010s. At the modest height of its usage in 2018, 0.021% of baby girls were named Mercy. Its ranking then was #729. Within all girl names in its group, Mercy was the most widely used in 2018. 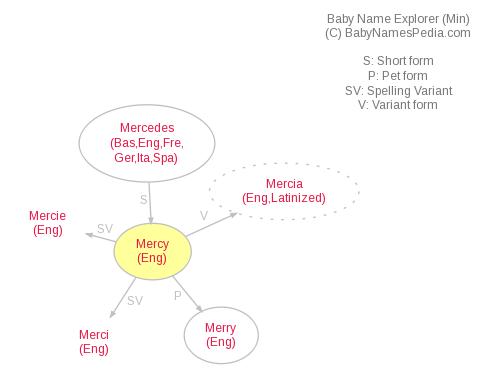