What does Merry mean?

[ 2 syll. mer-ry, me-rry ] The baby girl name Merry is also used as a boy name, though it is far more popular for girls. It is pronounced MEHR-iy in English †. Merry is of Hebrew, English, and Welsh origin. It is used mainly in English. English origin: The first name is derived from the common English word merry, which is itself from the Old English myrge. The name was used by Charles Dickens in his novel Martin Chuzzlewit (1844), in which the daughters Charity and Mercy are known as Cherry and Merry. See Merry for more information.

In addition, Merry is a spelling variant of the English Mary.

Merry is also a familiar form of the English Mercy.

Merry is also a shortening (English) of the English and Welsh Meredith.

Merry is uncommon as a baby girl name. At the modest height of its usage in 1954, 0.018% of baby girls were named Merry. It was #472 in rank then. The baby name has fallen out of favor since then, and is currently of only sporadic use. Within the family of girl names directly related to Merry, Mary was the most regularly used in 2018. Merry has in the last century been primarily given to baby girls. 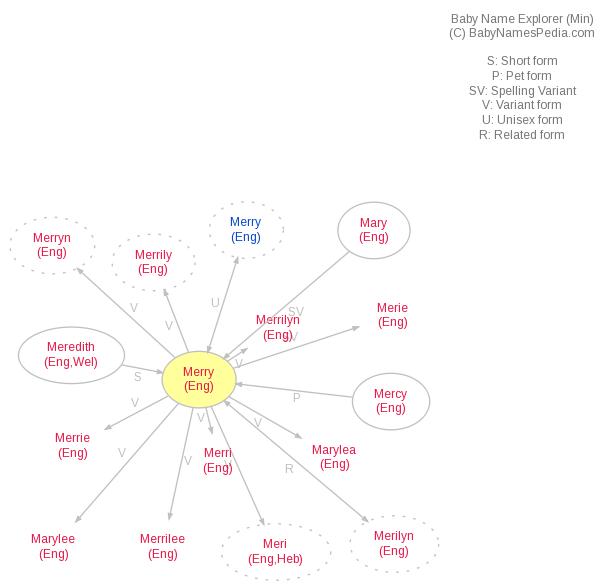